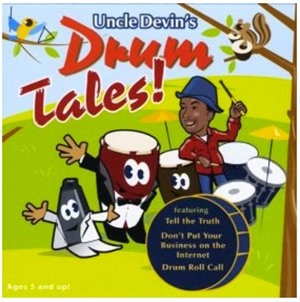 The Washington, DC-based educator, multi-instrumentalist, and composer, Uncle Devin, brings us a talented mix of ten songs that target younger viewers and listeners. As a children's album, the music is rather innovative and adult-oriented with occasional rap, spoken word, and helium-enriched vocals that get a message across without confusing listeners. The songs touch on social topics of Internet usage, healthy eating/living, days that don't go right, and doing what's right. Some of the songs, especially "Tell The Truth" and "Good Health Final," incorporate dance and electronic elements that stem from keyboard grooves of Eastern Africa. There are some vocal introductions to the percussion on "Drum Roll Call" that are engaging and performative. There are even scat vocals that mimic the percussive sounds. This is part African, South American, and North American. There are lessons in counting, language formation, and dance instruction. The quirky and comedic "I Like Onions" contains instructional learning about one of the most unlikely vegetables to make it in a song, but Uncle Devin succeeds with lead vocals, percussive tones, and munchkin-like vocals. Overall, the music is rather productive with varied vocals, spoken segments, varied percussion, multi-ethnic musical styles, and great lyrics. This one will be a favorite for parents, but the children will get a bigger kick out of the music. I give it five tiny fingers up! ~ Matthew Forss
Posted by Matthew Forss at 5:48 PM