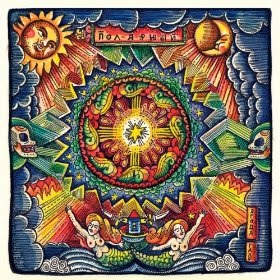 Based in Arkhangelsk, Russia--Russia's northwest region on the White Sea, Yagoda Galo performs folk, traditional, and original compositions from all around the North and in Russian lyrics. The eleven-track release contains some of the most beautiful and innovative Russian folk music ever recorded. The ensemble utilizes various instruments, including the didgeridoo, acoustic guitar, domra, mandolin, flute, clarinet, bongo, djembe, jew's harp, drums, bass guitar, and a few others. The result is a complex mix of songs that are vocally and instrumentally-rich. Many of the songs resemble early European or Scandinavian sea-faring songs, but these contain a Russian edge. At any rate, "By The Sea," "Far Away," and "Dreamboat" contain the most sea-faring elements. The best track on the album is probably "Around The Town." This track contains an extremely catchy melody and killer instrumental bridge at the end of the song. If you had to hear one song before you died; this would be it. I would not hesitate placing in the top ten best world music song list of all time. Polar combines the vocal/instrumental traditions of the Cold North, but presents us with the inner warmth of feel-good rhythms and melodies that shine beyond borders...and expectations. Polar is one of the best albums of music anywhere and at any time. ~ Matthew Forss
Posted by Matthew Forss at 10:30 AM