CD Review: Mara & David's 'Once We Were Gods' 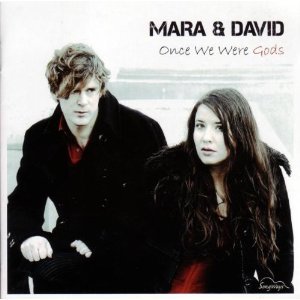 Mara & David
Once We Were Gods
Ozella Music

Germany's Mara & David brings us a warm world of cozy, alternative folk songs with a classical and pop vein. Mara's vocals accompany the acoustic guitar work of David, but Stephan Braun adds some cello and double bass to round out the repertoire. The folk leanings are contemporary in a similar company with Katie Melua or Heidi Talbot without drum accompaniments. Mara's soothing, almost sultry voice, carries sweetly throughout the album. Eleven songs highlight a relatively quiet, simple, and rustic sound. The intimate recording may be recorded in Germany, but the lyrics are in English with more resemblance to English or Scottish compositions. Some of the songs contain poetic verses with very little singing, while others contain more elaborate vocal displays. The punchy strings and lively guitar are neo-classical or alternative pop overall. Mara & David are 'gods' when it comes to music-making. ~ Matthew Forss
Posted by Matthew Forss at 6:11 PM