CD Review: Gift Of Tongues' 'Songs Of My People' 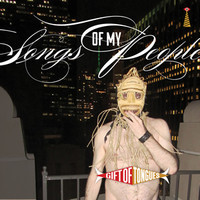 Gift Of Tongues
Songs Of My People
Self-Release

The theatrical and performative antics of electronica and dark music magnate, Gift Of Tongues, is not your usual music group. There are a mix of gruesome anthems with comedic, ironic, and thought-provoking lyrics about some of America's most provocative killers, including Manson and Dahmer. That is only one aspect of the recording, as the rest of the tracks contain darkly-brooding electronica with metallic and industrial beats, noises, and sounds that are rather light overall. The vocals are rather robotic, but the melodies are particularly catching, including the piano-based, Chopsticks-like portion of "Dahmeresque," as well as "What's Mommy Getting Up To," "Long Way Home," and "Home." More techno-focused tunes, such as "Big Bad Wolf," "Glory Hole," and "I Am A Large Man" showcase some poetic wordplay and blurby percussion. There are swishy sounds, blurby electronics, static vocals, robotic vocals, and piano melodies that meld the past with the future. There are enought sounds to evoke an enthusiastic response of enjoyment. There is a dark sense of humanity that permeates each song, but that is not a bad thing. When poetic lyrics, enticing rhythms and melodies, and theatrical displays of sound come together unabashed, Songs Of My People results. Think of Enigma crossed with Rob Zombie and Squonk Opera. Simply amazing. ~ Matthew Forss

Posted by Matthew Forss at 3:16 PM

thanks a lot for listening and reviewing! Much appreciated. And love this line: "Think of Enigma crossed with Rob Zombie and Squonk Opera"