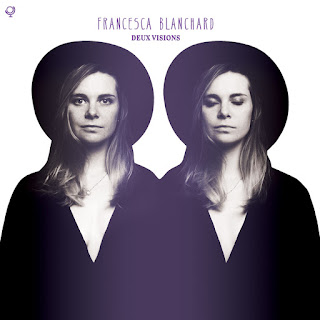 Deux Visions is translated as "two visions." In this case, the double references pertain to a French upbringing and current residence in Vermont. The songs are pop, folk, and rock oriented with both English and French lyrics. The melodies are pure heaven, as anyone with a familiarity with Carla Bruni, Francois Hardy, and Souad Massi. The tender vocal sound is intimate, poignant, and emotive. The light, contemplative ballad, "The Sea," is a fitting ending to a wonderful album, but the pop-rock brilliance of "Empty House,"  "Save A Different Way," and "Rame" showcase Francesca's innate ability to convey musical emotion with great melodies and rhythms in the same vein as the above-mentioned artists. Nevertheless, Francesca makes her mark in a very good way. Anyone with an interest in French pop and rock will love Deux Visions...and probably everything she releases in the future. ~ Matthew Forss
Posted by Matthew Forss at 2:24 PM