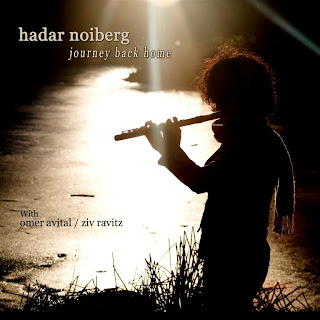 Hadar Noiberg
Journey Back Home
Self-Release
Hadar Noiberg performs on two flutes with two other musicians, Omer Avital on double bass and oud, and Ziv Ravitz on drums and assorted percussion. The trio, formed by Hadar, who is also a composer and musical arranger from New York City, performs instrumental compositions inspired by the Middle East. In particular, an Israeli cultural element dictates most of the musical directions. As a performer in other NY-area groups, Hadar's academic studies of the flute provide the listener with an educated sound of fluidity and a dose of subliminal austerity. Throughout the album, Hadar weaves in and out of world music, jazz, avant-garde, and classical idoms. Never straying too far from her Israeli roots, Hadar knows how to evoke moods and emotions through music. For instance, the flute flutterings on "Residue of a Broken Heart" eschew a sense of yearning backed by other instruments played with more of a Chinese sensibility. Nine total tracks are available to enlighten, inspire, and enthrall any listener without a doubt. Fans of instrumental, Middle Eastern, or Jewish folk music will admire the soothing sounds of Hadar Noiberg. ~ Matthew Forss
Posted by Matthew Forss at 2:10 PM