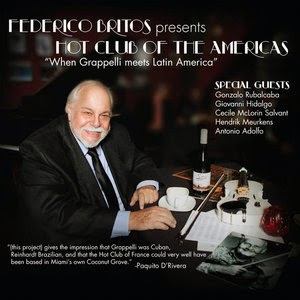 As a tribute to the music of The Hot Club of France and led by violin-wielding Federico Britos, the Hot Club Of The Americas, brings us a world-class recording with North American jazz sounds, Latin elements, South American folk, and Cuban percussion for a spectacular result. A native of Uruguay, Federico knows how to liven up any composition with earthy strings, bouncy rhythms, and jazzy interludes that are full of vivacity. A dozen songs feature a host of guest musicians, including Hendrik Meurkens, Gonzalo Rubalcaba, Cecile McLorin Salvant, Giovanni Hidalgo, and Antonio Adolfo, in addition to the regular line-up of Federico, Jorge Garcia (guitar), Felix Gomex (piano), Renyel Rivero (bass), Edwin Bonilla (percussion), and Carlomagno Araya (drums). In short, there are plenty of Gypsy and Latin-influenced jazz with a good deal of folk and classical thrown in rather appropriately. The  mostly instrumental album reinvents the jazzy 1960's era with engaging, moving, and lounge-ready songs that sway along in a lazy manner like a sultry, mid-summer afternoon on a quiet, Havana beach. Anyone with a fascination in world jazz and Latin/Gypsy concoctions will love Hot Club Of The Americas. ~ Matthew Forss