The 20th annual Edmonton Blues Festival took place August 24-26 at the Hawrelak Park Amphitheatre. It featured a stellar line up of diverse artists from multiple generations and blues traditions. Many of the acts were some of the festival's most requested from past years. Here is a look at some of Saturday's line up. Cécile Doo-Kingué brought some high energy, excellent guitar work, and spanned different musical genres. 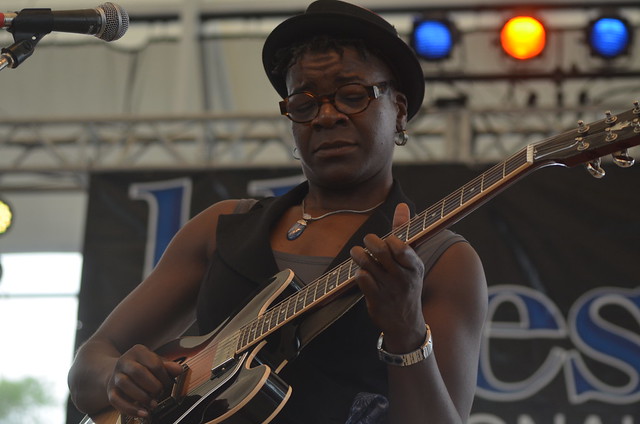 The Paul DesLauriers Band was solid, with a solid and danceable sound. 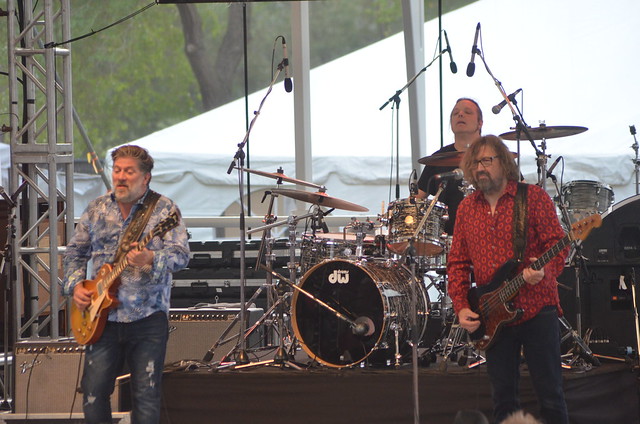 "Pianorama" featured Anthony Geraci, David Vest, and Graham Guest on the keys, with Brent Parkin's Red Hots taking care of the rest of the orchestration. 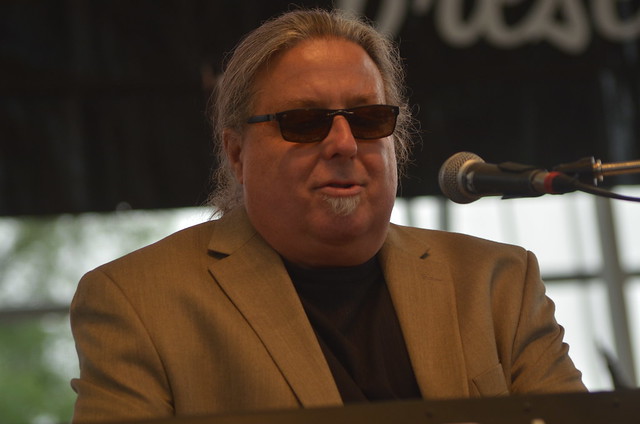 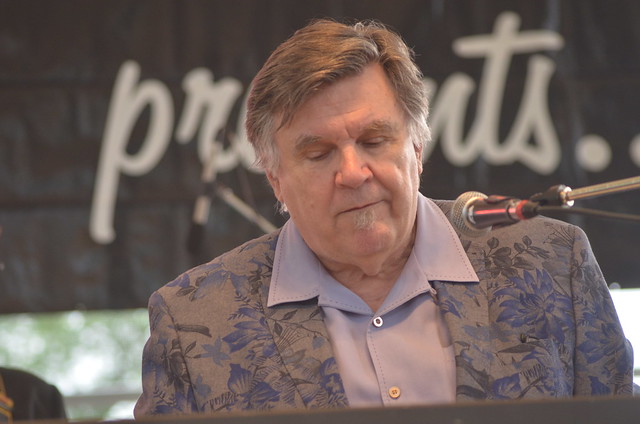 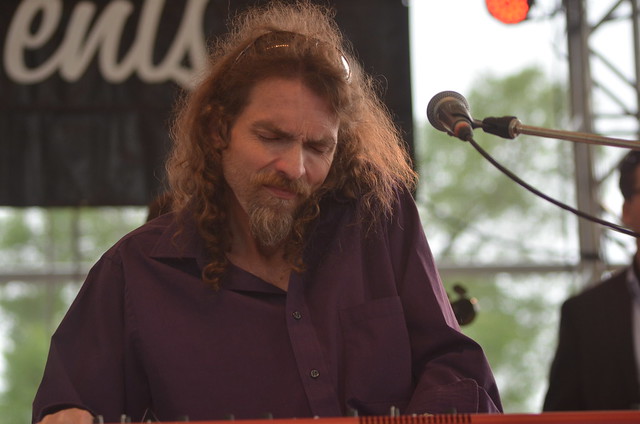 Juno Award winners MonkeyJunk was definitely a fan favourite. Fast, loud, and powerful, the trio holds the record for the number of albums sold at the festival. Later on in their performance, they were joined on stage by Big Dave McLean and Anthony Geraci. 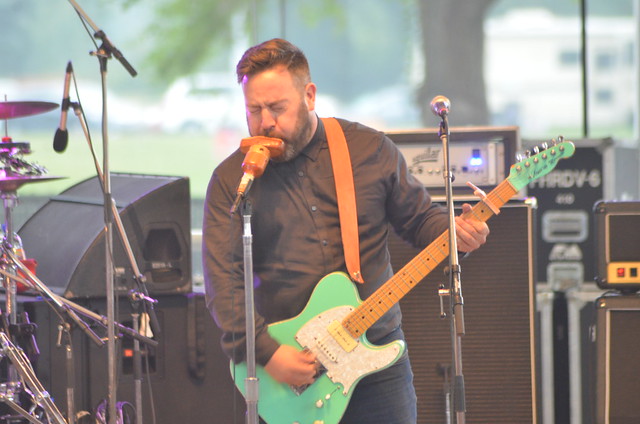 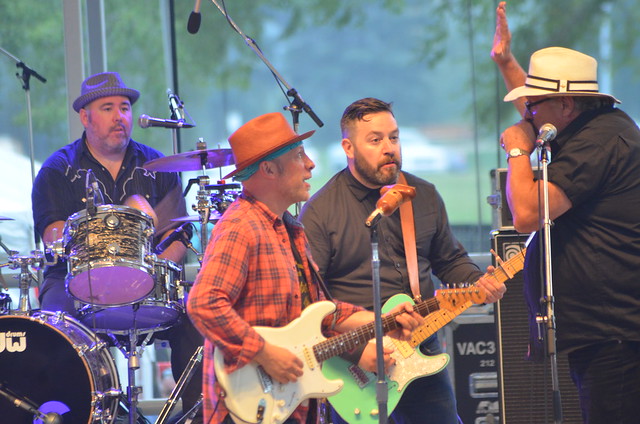 Samantha Fish, winner of the Contemporary Blues - Female Artist award at the Blues Music Awards in Memphis last May, rounded out the evening with her strong songwriting and guitar skills. 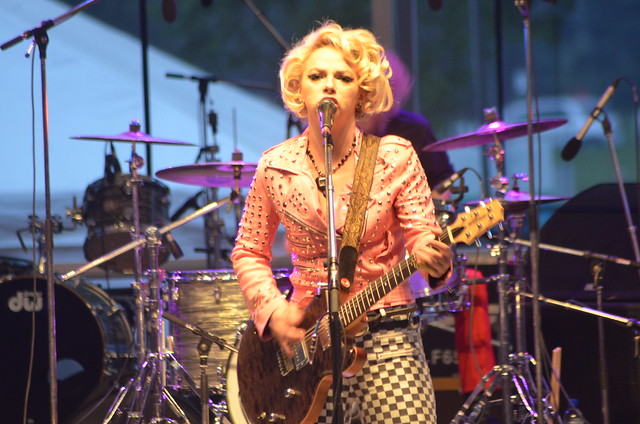 Congratulations to the organizers on another successful year. Here's to the next 20 years!
Posted by Paula E. Kirman at 2:03 PM No comments:

The 2018 Edmonton Folk Music Festival took place August 9-12 at Gallagher Park. As always, it featured an eclectic line up of music from different generations, genres, and cultures. Here is a link to an article I write for GigCity.ca about the Thursday evening line up, which included Tinariwen, DakhaBrakha, Buffy Sainte-Marie, and The Decemberists. REVIEW: Heat on the hill at folk fest My second piece for GigCity.ca focuses on the Saturday daytime line up, as well as some personal reflections of the unusual weather experienced during the weekend. I SURVIVED THE FOLK FEST (almost) Here is my complete collection of photos, including all of the acts I discuss in the above articles, the obligatory views from the hill, and more. ~Paula E. Kirman
Posted by Paula E. Kirman at 8:00 AM 1 comment: 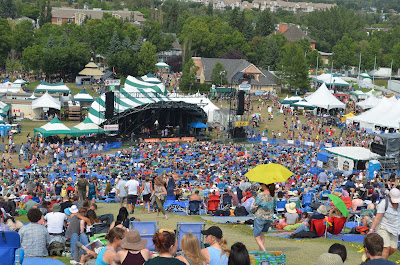 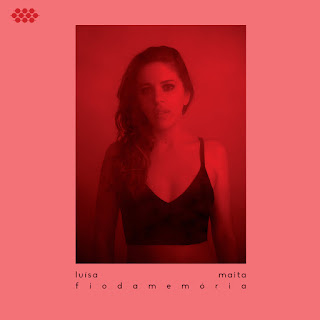 Brazil's Luisa Maita is not new to the world music scene with a few previously-released albums to her name over the last several years. On Fio Da Memoria, Luisa continues in her bossa nova, samba, and contemporary music stylings with some of the best stuff to date. One of the few English songs on the recording, "Around You," is an especially intriguing and catchy song that employs a berimbau-like tone with seductive hooks and breathy vocals for a truly enjoyable experience. The light guitar and percussion work on the jazz-tinged "Ole," suggests the sound of a 1970's James Bond film soundtrack. Luisa's great vocals match the equally-great instrumentation. Each track is different, but sports her characteristic breathy vocal delivery. Fans of Brazilian music with a contemporary edge and classic ambiance will love Luisa's latest offering. ~ Matthew Forss 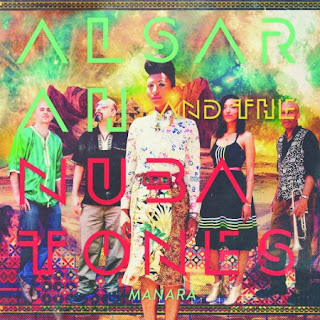 Alsarah's latest wanderings through the Middle East and North Africa are appropriately-displayed on their latest recording, Manara. The recording is alive with dancing ouds, throbbing ngonis, punchy trumpet, bubbling bass, and great percussion. The rather contemporary recording contains a good mix of melodies and tones. There is a slight electronic element to some of the songs, but this is not an electronic album. It is pure world music with influences reaching across the Middle East. The Arabic vocals and rollicking percussion are very dance-friendly. In fact, it is difficult to sit still while listening to anything from Alsarah And The Nubatones. For Manara, this is especially so. Fans of a variety of Arabic-infused recordings will love Alsarah And The Nubatones! ~ Matthew Forss

Hailing from South Africa, Lorraine Klaasen releases a new album of South African music, aptly-titled, Nouvelle Journee. The vibrant album artwork is only the beginning. The music is equally vibrant and rich in musical textures, harmonies, and instrumental arrangements. Lorraine's commanding vocal tone is melodic. The instrumentation is nothing short of amazing, as the accordion, bass, guitars, percussion, piano, and organ provide a slew of catchy arrangements. The rippling guitars on "Ke Tshepile Bafatsi," showcase Latin and Congolese influences. The R&B influences are not forgotten either, as "Home Sweet Home" conjures up images of Southern blues, gospel, and jazz. Though, upbeat music is Lorraine's specialty. Nouvelle Journee is a very classic, and contemporary album that touches the human spirit with a legendary and unforgettable voice. ~ Matthew Forss

Posted by Matthew Forss at 11:01 AM No comments:

"Elektro County" is a rollicking instrumental treat with ambient and spacey electronic sounds backed by keyboard accompaniment and atmospheric guitar work. The swishy percussion is accompanied by spacey tones and intergalactic noises that propel the track into a third dimension, or another galaxy. The guitar-like tune is upbeat and melodic with a slight country presence that is not particularly intrusive. The end of the song is a culmination of the musical elements from rock, new age, instrumental, and filmic worlds. The nearly four-minute song is aptly-titled, "Elektro Country," because it symbolizes a country edge with a modern twist of lush, electronic overtones. The music brings together a good mix of sounds that connote contemporary new age creations and electronic wizardry that does not lose its intensity or appeal. Overall, Galliano continues to amaze us with inventive songs new ways to discover some of the best instrumental music in the world. "Elektro Country" does not disappoint and Gary Ritchie's electric guitar work is perfect.

"Breathe" is a five-minute musical journey that is very magical and melancholic with subtle doses of acoustic and electric guitar work. The atmospheric washes and light vocal additions accentuate the song's delightful qualities. The cascade of sounds are steeped in lullabye-like arrangements that are meditative and dreamy. There is a host of new age-isms that come to mind, but everything is creative and memorable. The vocal additions are almost non-descript, but their sounds are very indicative of an early Enya recording. Compared with "Elektro Country," "Breathe" is a longer, more majestic tapestry of aural colors that only reinforces Galliano's amazing ability to create meaningful and vibrant songs with little in the way of instrumentation. From the opening, neo-classical arrangement to the electronic medley of sound, Galliano does not shy away from experimentation. Fans of world music, instrumental, jazz, new age, ambient, and related forms of music should be quite satisfied with Galliano's latest offerings. ~ Matthew Forss
Posted by Matthew Forss at 7:53 PM No comments: