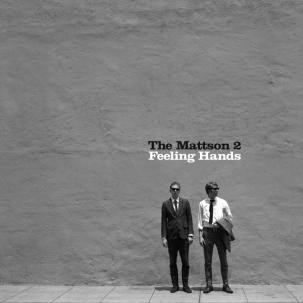 Jared and Jonathan Mattson bring us a different kind of jazz with Feeling Hands. In this case, their hands are quite apt at the drum kit, various percussion, guitar, bass, piano, and horn arrangements. This is not your typical jazz ensemble. Feeling Hands has attitude...surf-itude to be exact. Yes, the surf jazz, punk, and folk-rock genres from the land of sand and sun are eloquently reinvented by the talents of the Mattsons. An array of other instruments add a touch of classic, Brazilian or Latin melodies with sounds of relaxation. All of the songs are instrumental. The additional horn, sax, and string accompaniment sets the stage for some classical leanings that are fresh and perfectly aligned with surf jazz music. The spacious riffs are delicately produced without the interference of vocals or seemingly disparate genres. Anyone with an interest in surf music, jazz, South American, and instrumental music will find The Mattson 2 pleasantly satsifying. ~ Matthew Forss
Posted by Matthew Forss at 5:03 PM No comments: 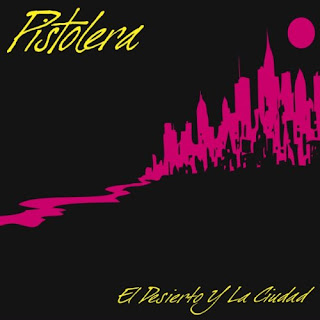 The Mexican-American repertoire of Pistolera is largely relegated to the alternative folk, rock, and ballad genres. Band leader and songwriter, Sandra Velasquez, performs songs with the clear artistic vision of Lila Downs and the dark grittiness of Germany's Ersatzmusika. Though seemingly disparate comparisons, Pistolera and Ersatzmusika contain the similar gritty guitars, deep bass, and accordion. However, Pistolera is still full of lively Latin-tinged percussion and dance ballads with all of the finesse of an elite songstress. Of course, there are more energetic, urban tracks, such as "Escucha," "Todo Se Cae," and "Ponle Frenos." The blaring horns, lively percussion, excellent vocals, and Latin mystique, serve as a wonderful mix of music bridging two countries together. If what you seek are some great tunes in the vein of Think of One, Lila Downs, and Erstazmusika, then Pistolera will please you beyond belief. Spanish vocals and some song descriptions are included in Spanish. ~ Matthew Forss

Posted by Matthew Forss at 9:06 AM No comments: 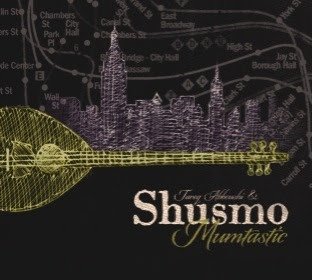 The Palestinian-raised Tareq Abboushi celebrates a progressive set of Middle Eastern music with a flair for the instrumental, funky, and danceability of a New York-based quintet of modern music. Though, the classical Arabic sound is inherent in all of the tracks. Mumtastic is roughly translated from Arabic to mean 'fantastic' and 'excellent'. The contemporary beats are not created by electronic wizardry or electronic guitars. Rather, the music is by the buzuq (lute), clarinet, zurna, drum set, congas, cajon, timbales, bass, riq, durbakkeh, cymbals, and assorted percussion. Some vocals are provided by Tareq Abboushi, though the majority of the songs are entirely instrumental. Overall, Mumtastic is a riotous musical journey with influences ranging from the Balkans, the Mediterranean, North Africa, Middle East, and Central Asia. For listeners desiring an ethnic dance experience without much of the modern-day electronic accompaniment, Mumtastic will surely please all senses. ~ Matthew Forss
Posted by Matthew Forss at 5:20 PM No comments: 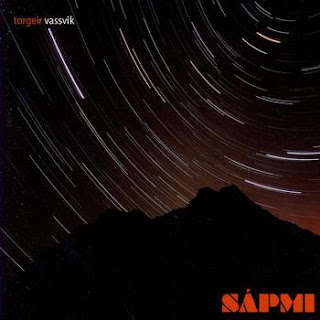 The Norwegian musician extraordinaire, Torgeir Vassvik, assembles a set of ten songs from the land of the Sami people. Historically, the Sami people inhabit the Sapmi region--for which the album was named--and includes the countries of Norway, Sweden, Finland, and Russia. The mysterious sounds of the viola, saw, bells, percussion, frame drums, field recordings, and guitars are played in such a manner to evoke images and sounds of the natural world. For instance, some of the sounds resemble falling rocks or clanging ice crystals. Moreover, the folksy melodies border on avant-garde. Torgeir's vocals are in the form of yoik singing, which is a form of throat-singing comparable to Inuit and Mongolian chanting. In fact, the instrumentation and singing is most similar to the music of Huun Huur Tu, coincidentally from the Mongolian/Tuvan region. Sapmi is an album that sticks with you long after the last note commences. Anyone with an interest in throat-singing, yoik chanting, or music from Scandinavia, should lend their ear to Torgeir's masterpiece. ~ Matthew Forss
Posted by Matthew Forss at 12:06 PM No comments: 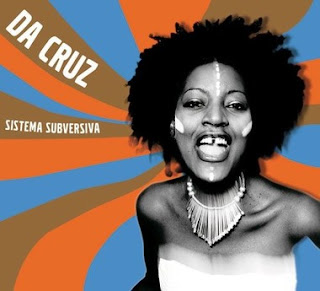 The Swiss-based Da Cruz is not an alpenhorn ensemble. On the contrary, it is an urban album of gritty, funky, and electronically-groovy tracks reflecting a South American and African presence. The contemporary beat of "Chega," "Boom Boom Boom," "Jangada," and others, turn the world upside down with a well-balanced set of music that is both Brazilian dance music and somewhat frenetic North American club music without the chintzy effects and endless, head-pounding club beats. Still, the music is largely urban-centered with some electrified bossa nova and funk with an electronic foundation. The album contains rather rudimentary instrumentation of programming, guitars, drums, bass, trumpet, sax, percussion, and Da Cruz' voice. Despite the limited instrumental repertoire, Sistema Subversiva is still an album with infectious beats, contemporary sounds, and a Brazilian edge that dispels myths of everything that has to come out of Brazil must be 'boss nova' or 'Carnaval'-related music. Da Cruz puts a new, fresh face on the sounds of Brazil (and Africa) via Switzerland. ~ Matthew Forss
Posted by Matthew Forss at 11:45 AM No comments:

CD Review: Vieux Farka Toure's 'The Secret' Is Out! 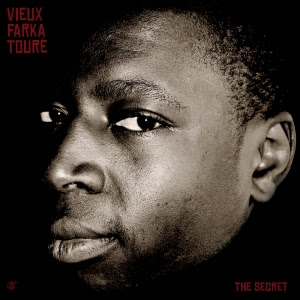 The third album in a classic vein of the late-Ali Farka Toure, The Secret, attempts to bridge Malian music with blues and pop. As a guitarist, vocalist, and percussionist, Vieux's talent lends itself perfectly to the production. The opening "Sokosondou" is a song with a quick rhythm and a style resembling modern Malian pop similar to fellow countryman Issa Bagayogo. "All The Same" is a wonderful ballad with some English vocals by Dave Matthews (of Dave Matthews Band-fame), who is originally from South Africa. The guitars, calabash, djembe, pandeiro, organ, bass, flute, ngoni, and drum kit create a relatively contemporary slew of melodies and rhythms from North Africa's Saharan region. Contemporary luminaries and blues guitar bands, including Tartit, Tinariwen, Toumast, and Tamikrest, come to mind. Though, Vieux's latest album is littered with bluesy, funky, and pop layers of musical goodness. Upon first listen, it soon becomes apparent nothing is secret anymore. The Secret is out! ~ Matthew Forss
Posted by Matthew Forss at 11:12 AM No comments: 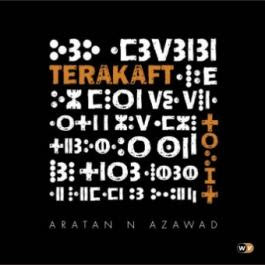 The Malian blues guitar group follows up their 2008 release of Akh Issudar (World Village) with a solid Aratan N Azawad. The album's title means 'children of the azawad'. The azawad is the Sahelian region of Tamasheq-speaking Tuaregs in Mali, Algeria, and Niger. The group's name is translated as 'caravan'. The nomadic references reflected in the name of the group and the Sahelian cultural influence is also marked by a few other similar groups from the region, including Tinariwen, Toumast, Tartit, Tamikrest, and others. Terakaft's songs are pleasant and carefully brewed with the finest Saharan sounds to emanate from the sands. Overall, the music is slightly stripped down from their Malian counterparts, most notably, Tinariwen. Additionally, the Tamasheq vocals are relatively rare in recorded music today. Thankfully, one can appreciate and even learn, or at the very least, pronounce this fine language as the songs become more familiar with each listen. The songs range from two-and-a-half to five minutes in length. The characteristic handclaps, bluesy guitar riffs, and light percussion secure Terakaft's presence in the Saharan music scene. Music is more than purely performance; it is a way of life that shines brighter than the desert sun! ~ Matthew Forss
Posted by Matthew Forss at 4:59 AM No comments: 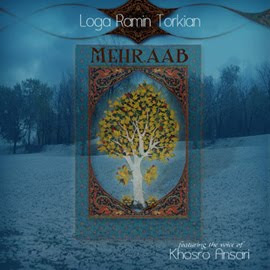 Iranian-born composer and multi-instrumentalist Loga Ramin Torkian has worked with esteemed groups, such as Niyaz and Axiom of Choice. Loga is joined by a Persian classical singer named Khosro Ansari. Khosro's voice adds a poetic and contemplative effect to some of the tracks, including "Az Pardeh," "Golzare Ashegh," "Chashme Jadu," and "Mehraab." The album's title, Mehraab, means 'shrine' in Persian. In effect, the music is the shrine of freedom from formalities, order, and confined spaces. The music is magnificently mixed by Carmen Rizzo, whom also worked with Mongolia's Huun Huur Tu on Eternal (Electrofone, 2009). Mehraab contains modern arrangements that accentuate the traditional sounds of the local instruments. Instruments as diverse as the rubab, baglama, djura, kamaan, brush, bendir, riq, shaker, darbuka, kik, tepsi, dohol, and santoor are just some of the many instruments. As a whole, the album fluctuates between haunting vocals, light percussion, jaunty strings, and electronic processing that adds a special effect to the music. If Persian, Middle Eastern, or folk music with a modern flair is what you seek, then Mehraab is an excellent choice. ~ Matthew Forss
Posted by Matthew Forss at 5:01 AM No comments: