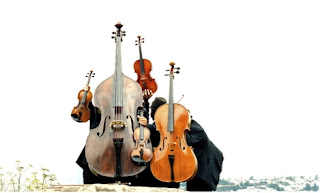 Formed in San Francisco, California in 2008, The Musical Art Quintet coined a new term for the music they were producing: "nuevo chamber". This music attempts to encompass the various world music influences and styles now infusing classical traditions. For instance, Nuevo Chamber incorporates tunes devoted to, or inspired by, Argentinian tango, the great Fela Kuti, Malagasy guitar, South American percussion, and classical waltzes. The mostly instrumental album contains twelve tracks without the accompaniment of drumkit or electric guitar. In fact, this is primarily a string album with some notable accompaniment on conga, bongo, maraca, guiro, and keyboards. The only vocals are contained on "Life Is Beautiful" and "Ombligao en Argentina," which are a little different in sound than the rest of the album. Still, Nuevo Chamber is a new sound with a new name, and The Musical Art Quintet leads the way! ~ Matthew Forss
Posted by Matthew Forss at 6:03 PM No comments: 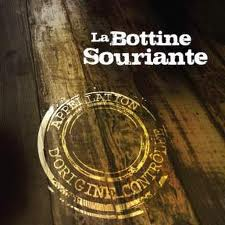 Over thirty years of music-making and numerous albums have not stopped Quebec's La Bottine Souriante from producing great music. The folk music is relatively unique and fresh, since it incorporates alot of European percussion and Irish melodies. The French influences are pervasive throughout. For instance, the song lyrics are in French in the liner notes. Plus, the fiddling traditions of Southern Canada and Ireland for that matter, are effortlessly showcased on vocal and instrumental tracks. Twelve tracks round out the album with a majority falling somewhere in-between folk, Irish, and French folk music traditions. All in all, La Bottine Souriante know how to make lively, dance-ready tunes in a jazzy, folksy, and traditional setting. Quebecois fans should rejoice with this special recording of superb music for any occasion. ~ Matthew Forss
Posted by Matthew Forss at 5:41 PM No comments: 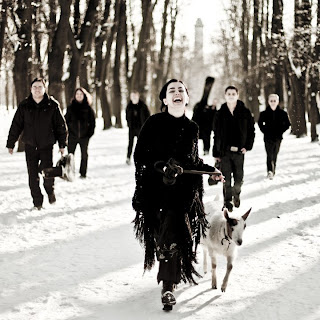 The Czech Republic-based band, Nisos, is a lively, contemplative, and folk-based, world music group that incorporates a plethora of styles from Turkey to Greece. The Greek influences are found in the instruments and rhythms. Furthermore, the band name means "island" in Greek. It appears their musical influences from Turkey, Greece, Bulgaria and Israel reflect the folk traditions inherent in these distinct cultures. However, Nisos attempts to combine them into a sort of fusion that sounds natural and very appealing. A variety of pleasant instruments are utilized, including the lyra, santuri, buzuki, saz, clarinet, kaval, oud, guitar, lute, trombone, trumpet, kanun, and double bass. The music is only around half-an-hour long, but the quality makes up for any time deficiencies. The vocals and instruments are worth their weight in gold....or "Mana" (my favorite track). ~ Matthew Forss
Posted by Matthew Forss at 4:56 PM No comments: 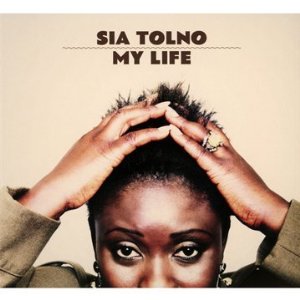 Sia's Guinean and Sierre Leone roots are eloquently conveyed on her latest release, My Life. Sia combines scintillating rhythms and melodies reflecting the musical cultures of West Africa, Latin America, and European folk/rock. There are elements of dance, funk, and jazz throughout. Sia's voice is very reminiscent of Benin's Angelique Kidjo. In the same manner, fans of Angelique's work should like Sia's commanding voice and creative energy. Twelve tracks reflect a good mix of musical rhythms and instruments, including the iconic balafon pervasive throughout West Africa. My Life is an excellent album showcasing Sia's musical and ethnic heritage without resorting to mindless riffs, dull beats, or unimaginative sound structures. In short, Sia is a musical genius that deserves recognition the world over. ~ Matthew Forss
Posted by Matthew Forss at 2:47 PM No comments: 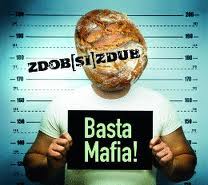 Moldova might be one of the poorest European countries, but they are rich in musical productivity from their hottest band, Zdob Si Zdub. Basta Mafia! is a rock, folk, pop, and edgy, punk-driven production steeped in ska, electronica, and in-your-face melodies that shake one's body into submission. The dark melodies contain rock-like vocals, but nothing that is too hard on the ears. The vocals are perfect overall, and generally fit the alternative-punk-rock vein. The lyrics are humorous and pertain to traveling, relationships, and the poetic side of society. Basta Mafia! is a cutting-edge album from a seldom-heard region of Europe--especially to world music fans outside of Europe. The slightly avant-garde elements of the album are somewhat linked to Balkan tunes and the musical atmosphere of Berlin, Germany. A stunning release from a Moldovan Weezer-Blink 182! ~ Matthew Forss
Posted by Matthew Forss at 1:38 PM No comments: 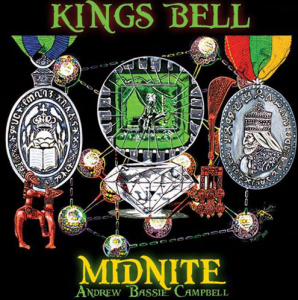 The reggae infusions of Andrew Bassie Campbell, Vaughn Benjamin, Leroy Wallace, Earl Smith, Squidley Cole, Sticky Thompson, and others, shine through on the St. Croix, Virgin Islands and Jamaica release. The Caribbean reggae sound is very much alive and a pervasive influence in the highly-spirited and intellectually verbose wordplay throughout Kings Bell. Reggae fans will notice the great bass, drum lines, guitar, and keyboard dubs that make any reggae album stand out from other sounds and genres. The sixteen tracks are infectious and soulfully-driven with good lyrics and fun rhythms. The successful career of Midnite spans dozens of albums over the years and shows no signs of quitting or decreasing in quality. Reggae fans unite and party with Midnite all 'nite' long. ~ Matthew Forss
Posted by Matthew Forss at 1:19 PM No comments: 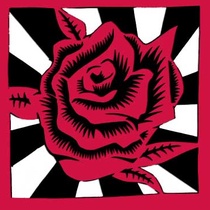 NYC-based and Balkan-driven, the Raya Brass Band is anything but boring. The riotous and raucus sounds emanating from the whirling brass stems from Macedonia, Romania, Serbia, Greece, and other regions with Gypsy rhythms and soul. The frenetic brass is clever, inventive, and diverse. Mostly an intrumental effort, Dancing On Roses, Dancing On Cinders also contains some vocals on "Srpski Splet." A variety of instruments are utilized, including the trumpet, tuba, accordion, sax, clarinet, and assorted percussion. The high-energy and party-like musical atmosphere is perfect for any occasion that requires dancing. The upbeat brass and melodies borders on Klezmer music, too. The Raya Brass Band's music is as sweet as a blossoming rose with equal amounts of fiery passion. Anyone with an interest in Balkan brass music will love the edgy and fun sounds of the Raya Brass Band. ~ Matthew Forss
Posted by Matthew Forss at 12:44 PM No comments: 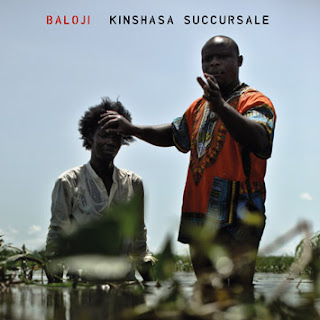 Baloji is a hip hop and rap talent hailing from the Democratic Republic of Congo and Belgium. However, Baloji's rap influences are not as strong as the soukous, afro-pop, and funky dance rhythms that permeate the album from top to bottom. Additionally, Baloji employs collaborations with guest musicians, including Konono No. 1, Monik Tenday, Larousse Marciano, Moise Ilunga, Bebson De La Rue, Zaiko Langa-Langa, and others. The contemporary album contains a hint of rock, Latin, European, and electronica with equal amounts of hip hop, rap, and funky wordplay with drumkit, guitars, and percussion from Africa. Baloji sings in Swahili. The opening cha-cha track, "Le Jour D'Apres," represents a solid, influential genre of music throughout Central Africa. The diverse melodies, rhythms, and genres represented make Kinshasha Succursale a definitive recording for the Congolese music collector and afro-pop aficionado alike. ~ Matthew Forss
Posted by Matthew Forss at 12:26 PM No comments: 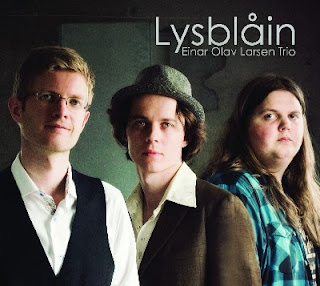 The fiddling traditions of Norway are unparalleled. Einar Olav Larsen's playing ability is no exception. The music of Lysblain is wholly instrumental and features the works of Hilmar Alexandersen and Sturle Hallas on fiddle and piano, respectively. The moving tunes are spritely and steeped in tradition, but very contemporary in feel without all the showy effects of electronic or dance wizardry so common in modern pop or rock. These tunes are traditional waltzes, marches, polka, and vaudeville-type songs that echo an era from long ago. The piano accompaniment is somber, yet entirely necessary for the varied fiddle accompaniment. Einar might best be known from his work with the Finnish group, Frigg. Anyone interested in traditional fiddle music from Norway should look no further. ~ Matthew Forss
Posted by Matthew Forss at 3:02 PM No comments: 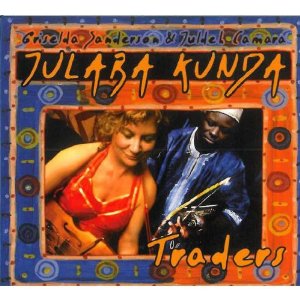 Traders is a more African-focused recording than Griselda's previous release, Harpahonics. Nevertheless, the nyckelharpa is still a mainstay, though the riti, kologo, water calabash, thumb piano, and talking drum make an appearance and represent the music of Gambia and other parts of West Africa. In a similar manner, the music of Africa gels perfectly with the organ, piano, fiddle, viola, and other instruments from the "North". The rousing melodies and introspective vocals make Traders a lively album to kick-back and relax with. The energetic percussion and string arrangements create a super-fluid feel throughout. Not one weak track exists on this album. Anyone interested in European, Scandinavian, and African music will love Julaba Kunda's latest release. Not to be missed! ~ Matthew Forss
Posted by Matthew Forss at 2:36 PM No comments: 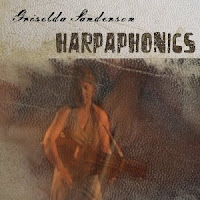 Griselda Sanderson
Harpaphonics
Waulk Music
Though issued a few years ago, the wholly instrumental Harpaphonics should gain some newfound exposure with Griselda's creative, mesmerizing, and diverse playing abilities on the nyckelharpa (keyed fiddle). The nyckelharpa is common throughout Sweden, but Griselda hails from Scotland. Consequently, some of the nyckelharpa tunes possess a Nordic, Celtic, and Scottish flavor. Keep in mind, Griselda is not shy about fusing West African percussion and instrumentation to the mix. In fact, water calabashes, djembe, and riti fiddle (played by Gambian musician, Juldeh Camara) are added to the nyckelharpa repertoire. Additionally, the bodhran, guitar, violin, double bass, zarb, organ, accordion, and viola make an appearance to lighten the mood and spirit of all those within earshot of its pleasantries. In short, Harpaphonics spans the Balkans, African continent, Scandinavia, the Mediterranean, and the Middle East with its melodies, modes, and magic. A bonus video of "Irimi" is included on the enhanced CD. ~ Matthew Forss
Posted by Matthew Forss at 2:13 PM No comments: