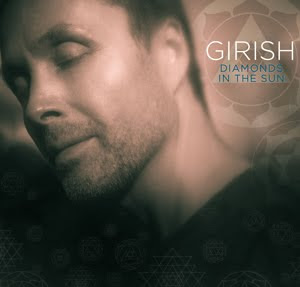 Girish
Diamonds In The Sun
Independent Release
Girish is an American vocalist, guitarist, keyboardist, and harmonium player with a relaxed, yet intelligent approach to music creation. Specifically, Girish studied yoga, meditation and ancient Sanskrit texts and chants, some of which are incorporated throughout the album. Importantly, this is not a lack-luster attempt at spiritual enlightenment through music. Instead, Girish produces lively, Sanskrit and English-language tracks with pleasant rhythms and folksy vocals all performed under the larger umbrella of the New Age/World Music label. Girish is joined by a plethora of musicians with instruments ranging from the esraj, mandolin, sarangi, piano, violin, and various brass and strings. Altogether, Diamonds In The Sun is a 'brilliant' album in a genre all its own - appropriately defined as 'yoga-pop'. The title track would probably be a perfect single for the genre in a yoga-pop Top 10 list. Listen to Girish bring light into your world. Shine on, shine on! ~ Matthew Forss
Posted by Matthew Forss at 1:53 PM No comments: 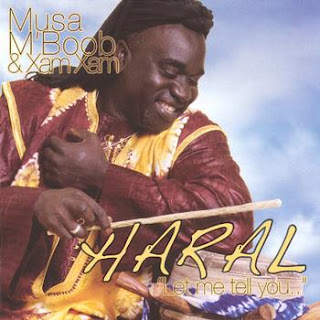 Musa M'Boob & Xam Xam
Haral (Let Me Tell You)
Independent Release
Gambia's premiere percussionist, Musa M'Boob has learned the drumming traditions of West Africa from a long line of ancestral involvement in the Gambian music world. A top percussionist, Musa also sings and plays the sabar, djembe, dun dun, snare, and tama. He is joined by his band-mates, Xam Xam. There is a rich musical repertoire with bass, keyboards, guitar, sax, kora, modern drums, and back-up vocals always in the local language. Though Musa is based in England, his sound is uniquely Gambian with a jazzy and modern Afro-pop style. The rhythms are inventive and never dull. The song titles are translated in the liner notes with short song descriptions in English. This is the first contemporary Gambian release to emerge in years. Do yourself a favor and show Musa (and Gambia, for that matter) you care about the music! ~ Matthew Forss
Posted by Matthew Forss at 12:12 PM 1 comment: 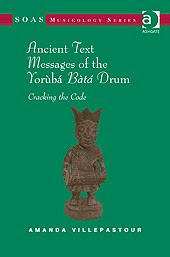 Ancient Text Messages of the Yoruba Bata Drum: Cracking The Code by Amanda Villepastour. SOAS Musicology Series. Ashgate: Burlington, VT, 2010. 173 pp. CD included.
The analysis of Yoruba drumming techniques and coded language is the primary focus of this study. Amanda's background as an ethnomusicologist, with the aid of other Yoruba experts, notably Rabiu Ayandokun and Tunde Adegbola, provide key insights into the 'coded world' of the Yoruba drumming traditions in southwest Nigeria. In order to fully understand the Yoruba drumming language, a helpful CD is included that accompanies the text's various examples. This is especially beneficial for understanding drum-beats, transcription and notation analysis. There are 42 tracks on the CD that include drumming 'speech' and some 'human' vocalizations. The history of the bata drum, Yoruba religious traditions and musical analysis provides a broad picture for an introductory study of Yoruba drumming. Amanda's incorporation of earlier bata drumming studies and contemporary misrepresentations or misunderstandings with regards to Yoruba drum speech is especially invaluable. The book is organized into four distinct chapters on the history of Yoruba communication, how the bata drum talks, other speech systems, speaking in codes, and performance study of bata musicianship. In addition, several musical tables and black-and-white illustrations are included throughout the text. The appendices include song translations, Amanda's research methods, discography, bibliography, and index. Overall, the most important aspect of the text is it's relatively remarkable collection of research on a seldom-known, at least on a global scale, drum language. The accompanying CD helps the reader understand the written language (notation). The organization of the book is highly-readable and never confusing. It is highly recommended for students in African ethnomusicology, drumming researchers, and those interested in learning a bit more about Yoruba drumming language. I guarantee it will speak to you. ~ Matthew Forss

Posted by Matthew Forss at 9:17 AM No comments: Kat Parra
Dos Amantes
JazzMa Records
Sephardic songstress, Kat Parra, brings us another fine set of songs with an Afro-Latin twist. Kat sings in multiple languages, including Ladino, Spanish, English, and Portuguese. The lyrics provided in the liner notes are mostly Spanish/Ladino and English. Each song is subtitled with a general music category for easy reference. These categories include rumba, afro-peruvian lando, sephardic world jazz, afro-latin, north african jazz, afro-cuban, and afro-caribbean. Consequently, the album's musical arrangements mimic the abovementioned musical cultures. However, Kat's musicianship still retains a unique sound with limited brass and string compositions and a mix of woodwinds, keyboards, bass, varied percussion, and drums. The romantic sounds of Kat's voice and the instruments appropriately encapsulates the true essence of Dos Amantes (Two Lovers). A classy release from a classy vocalist! ~ Matthew Forss
Posted by Matthew Forss at 2:03 PM No comments: 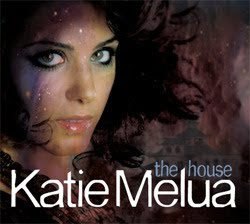 Katie Melua
The House
Dramatico
As a follow-up to Katie's second release, Pictures, The House stand out as an artistic marvel for the ears. Katie's voice takes on Leigh Nash of Sixpence None The Richer fame, former Cardigans lead singer, Nina Persson, and Geike Arnaert of Belgium's Hooverphonic fame. The music is not folk, rock or pop, but a combination of each style. Lyrically, the songs are fun and funny, as in "Tiny Alien" and "God On Drums, Devil On The Bass". There is a hint of nostalgia in Katie's vocal style and some of the instrumentation follows in that vein, as in "A Moment Of Madness". The poetically-inclined art-pop song, "Red Balloons", is something Shawn Colvin might have composed, especially since her last album was titled after a house (These Four Walls, Nonesuch). However, all the songs are written or co-written by Katie and represent a style all her own. All the songs are playful, catchy, intelligent, and coherent from a lyrical, vocal, and instrumental point of view. If you like good music, then you are cordially invited into 'The House' by Katie Melua. Vocals and liner notes in English. ~ Matthew Forss

Posted by Matthew Forss at 12:02 PM No comments:

Blou at the International Children's Festival 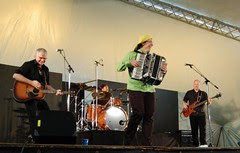 Blou at the International Children's Festival
Originally uploaded by raise my voice
The International Children's Festival in St. Albert is probably the only local festival I have never attended. As a non-parent, the displays and performances exclusively geared towards children, simply do not appeal. However, I was forced to reconsider when I found out that Blou was coming to this year's festival.

Blou is a four-piece band that centers around front man Patrice Boulianne (from Nova Scotia) and his Acadian/Cajun/Zydeco accordion stylings. The music is very energetic and, to risk sounding like a movie rating, suitable for all ages. Of course, this show at the festival was geared towards children and included a lot of audience participation, which was strictly enforced as my guest and I discovered when we were singled out several times!

The bilingual show was an obvious hit with the audience (which consisted of the mostly 10 and under set) and the adults enjoyed it as well.

Here is a collection of photos from the show (and a few random ones from the festival grounds) as well as videos of two songs: Oh Madeleine and Pauvre Johnny. ~Paula E. Kirman
Posted by Paula E. Kirman at 5:12 PM No comments: