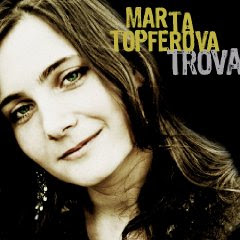 Marta Topferova
Trova
World Village
Czech-born and New York-based, Marta Topferova, follows her 2006 release Flor Nocturna with the latest album, Trova. The Czech connection pretty much ends with her name. The music is primarily in Spanish, and indicative of the Latin/Caribbean troubadour-type ensembles. Interestingly, Trova is the root word for troubadour. It is only fitting that Trova would not fail to live up to the expectations of Caribbean, Puerto Rican, Cuban, and Latin American music fans everywhere. Marta's voice seems more mature, but wonderfully heartfelt. There is an element of fado or flamenco that creeps up throughout the album. Marta sings and plays the guitar and cuatro. This is probably the only Czech-born, Latin music-making musician you will ever come across. In that regard, Trova is a vital link between the Spanish and European worlds. If anything, you will smile and find your toes tapping to the percussive and rhythmic tunes of Marta Topferova. ~ Matthew Forss
Posted by Matthew Forss at 10:00 AM No comments: 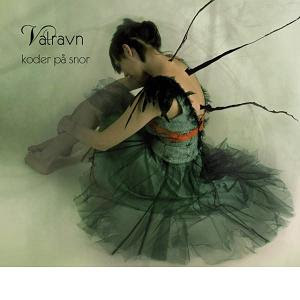 Valravn
Koder pa snor
Voices Music & Entertainment
Valravn is a quintet with a lead singer, Anna Katrin Egilstrod, from the Denmark-owned, Faroe Islands. The Faroe Islands are located between Iceland and Scotland. Anna is joined by Danish-frontmen, Martin Seeburg on flutes, viola, vocals, Soren Hammerlund on mandola, hurdy gurdy, nyckelharpa, and Christopher Juul on keyboards/electronics. Juan Pino is from Switzerland and plays the davul, hammered dulcimer, and percussion instruments. After their self-titled, 2007 release, which included re-interpretations of old, Nordic songs for a contemporary audience. On Koder pa snor, which means, "codes on a string", they primarily write most of the songs. The album title represents that every particle in the universe is connected. Naturally, the songs follow a sinewy, musical path with unique electronic sounds and the heavenly voice of Anna. Valravn, which means "raven of the slain", is a familiar reincarnation of the now defunct, Emma Hardelin-led Swedish group, Garmarna. Though, there are hints of Denmark's Sorten Muld and even Belgium's Hooverphonic. All in all, the music threads the listener through mystical and haunting adventures that is anything but scary. A true delight! ~ Matthew Forss
Posted by Matthew Forss at 7:15 AM No comments:

I would like to inform you of a newsletter I will be writing beginning this winter. It will be $20/yr. regardless of location, since it will be sent directly to your email in pdf. It will be published bimonthly. It will provide a 'voice' for world music fans/academics, and it will be the only publication devoted to world music producers, labels, artists, professors, by bringing you the inside scoop on contemporary and historical issues in ethnomusicology.

***If you are interested in receiving this newsletter, please let me know by sending me a short email with your NAME, COUNTRY OF ORIGIN, CONTACT EMAIL, and SPECIFIC INTEREST IN WORLD MUSIC.***

Please direct the above information to:
Matthew Forss

You will hear from me in a few weeks if there is enough interest to continue with the project. Thanks.

Posted by Matthew Forss at 8:29 AM No comments: 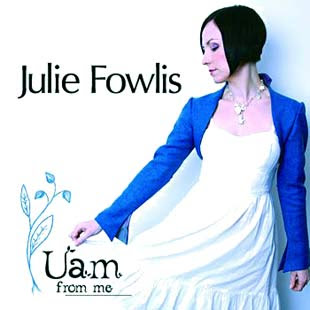 Julie Fowlis
Uam (From Me)
Shoeshine Records
The Gaelic-Scottish singer, Julie Fowlis, presents us with another round of intimately sweet songs of life and love in the Hebrides, Scotland, and beyond. Julie's real charm is found in her vocal style. Her voice is extremely sincere and pleasant, which makes anyone's heart who listens to it melt with delight. She is similar in sound to Heidi Talbot or Karine Polwart. Though, she is joined by her husband Eamon Doorley and others, on bouzouki, fiddle, guitar, flute, bass, accordion, piano, and bodhran. There is a nice mix of traditional instrumental and vocal tunes to enjoy. The songs are mainly in Gaelic, but a few English words pop-up, too. The liner notes provide information on the songs in Gaelic and English. The tunes are diverse enough to attract folk or Celtic music fans. Yet, anyone looking for enchanting music, then Uam is perfect. In fact, Uam means 'from me'. It does not take long to understand that this new album is Julie's gift to the world. Grab a partner and dance to the jubilant and sweet voice of Julie Fowlis. ~ Matthew Forss
Posted by Matthew Forss at 11:07 AM No comments: 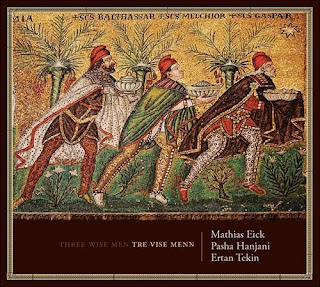 The Three Wise Men (Tre Vise Menn)
The Three Wise Men
Kirkelig Kulturverksted
The Three Wise Men are Mathias Eick from Norway on trumpet, piano, vibes, bass, and percussion; Ertan Tekin from Turkey on duduk flute; and Pasha Hanjani from Iran on ney flute. In celebration of the Christmas season, The Three Wise Men play wholly instrumental tunes from various traditions, including German, Scandinavian, French, English, Sicilian, Norwegian and Palestinian. More familiar tunes include "O Come, O Come, Immanuel", "Hark The Herald Angels Sing", "Silent Night", and "O Little Town of Bethlehem". All of the tracks are very easy to listen to. They are musically invigorating and reflective pieces of history. It's a perfect example of what happens when cultures come together for a common cause. In fact, this is Kirkelig Kulturverksted's philosophy on musical production from the start. This is an ideal album for Christmas gatherings, theatrical productions, family functions, and anyone who relishes instrumental Christmas works. ~ Matthew Forss
Posted by Matthew Forss at 10:46 AM No comments: 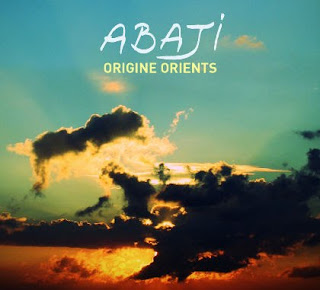 Abaji
Origine Orients
Absilone Music
Born in Beirut, Lebanon to parents of Turkish, Syrian, Greek, and Armenian lineage, Abaji is quite the instrumentarian. He has collected nearly 250+ instruments from the Mediterranean region, South America, Europe and the Middle East. Abaji plays the duduk, oud, bouzouki, daf, Bali flute, saz, harmonica, kemenche, and a few other instruments throughout the album. His folksy, bluesy Mediterranean concoctions eschew an earthly resonance of multiple ethnic roots. Moreover, Abaji sings in five different languages, including French, Arabic, Greek, Armenian, and Turkish. The entire album was recorded over two days and is void of re-recording and remastering of the tracks into a polished and commercialized piece of character-less matter. However, Origine Orients is a beautiful work of art that echoes back centuries ago to it's ancient roots along the Silk Road. At times, the instrumental medleys remind one of Australia's multi-talented, multi-instrumentalist, Xavier Rudd. Abaji's musical journey is contemplative, energetic, inspiring, and always imaginative. Nicely done! ~ Matthew Forss
Posted by Matthew Forss at 8:52 AM No comments:

The musical achievements of the late-Alan Lomax are superbly displayed in this attractive 10-CD box set with accompanying photos, map, and two books, including Alan's field journal. The songs were recorded throughout Haiti from 1936-1937 for The Library of Congress. These are largely traditional, field recordings with typically grainy and raw sound quality. However, the CD's are mastered by Grammy Award-winning engineers to elicit the best sound quality available today. The music was culled from over 50 hours of never-before-released field recordings. You will hear Voudou songs, percussion pieces, choral sounds, vocal/instrumentals of people young and old, male and female, and even Alan's own voice explaining where a specific song was recorded and/or noting the musicians themselves. The box set format of this size is unique and relatively rare in the world of international music. Still, do not let the price tag of $120+ deter you from purchasing a literally priceless volume of musical history from the perspective of the ethnomusicologist. For fans or students of traditional music, especially from the Caribbean, this is a highly-desirable gift. Of course, Alan Lomax fans will put this set on the top of their list this holiday season, for good reason. Look for more good things to come from Harte Recordings in the future! ~ Matthew Forss

Posted by Matthew Forss at 7:42 AM No comments: