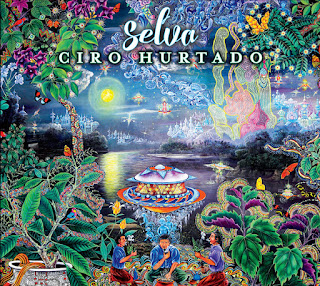 The Peruvian-born and California-based, Ciro Hurtado, brings to life the sounds of his homeland, which are eloquently captured throughout the new album, Selva. Ciro's roots are found in the album's title, which is Spanish for 'jungle.' The album artwork is as colorful as the music. Ciro's wife, Cindy Harding, provide some vocals, while the music is mainly steeped in Latin fusion, light jazz, and acoustic forays. The pleasant music is never boring or uninspired. In fact, it encompasses some of the best instrumental sounds from the region. There are even classical Indian elements. The album is rather contemporary in its approach, making sure not to veer off too far in any one direction (i.e. rock, folk, fusion, etc.). However, there is a nice mix of lounge melodies, new age concoctions, and simply beautiful sounds that run the gamut from Amazonian, pre-Columbian, and cumbia-inspired tunes. Ciro's guitar and charango work are outstanding throughout. Simply put, this album is perfect for any occasion and any person. This is one of the best 'Latin' albums to ever come out. Own it now! ~ Matthew Forss
Posted by Matthew Forss at 8:46 AM No comments:

Please send all inquiries regarding music coverage to: worldmusicman2013@yahoo.com. Send any promos and full-length releases in CD or LP form to the address below. Thanks.