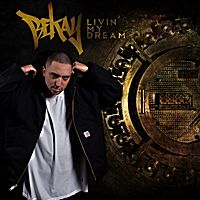 Bekay's amped-up rap-infused tracks from Brooklyn, New York are in-your-face and ready to take America by storm. The twelve tracks are actually five different tracks with various remixes (both clean and explicit) of each track. At any rate, Bekay's lyrical delivery is a bit slower than Eminem, but no less fascinating. Interestingly, only three tracks are original: "Grab Someone," "Livin' My Dream," and "Fuk U." The original songs and remixes include hard-hitting lyrics about relationships, partying, urban lifestyles, and celebrating rap/hip hop culture. "Open The Door (Let 'em In)" is a rap cover of Paul McCartney's song. Also, "Where Brooklyn At" is a cover of the late-Old Dirty Bastard's hit song. Bekay incorporates a bit of shout-outs, indiscriminate vocals, and a party-like atmosphere with electronic wizardry, tight percussion sets, and urban dance grooves. Fans of rap and hip hop will love the music of Bekay, even though the album is a little short and if it includes seemingly senseless remixes and edits. Start a party on the streets with Bekay today! ~ Matthew Forss
Posted by Matthew Forss at 1:37 PM