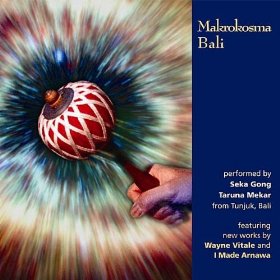 Initially a science-focus, Makrokosma Bali eventually centered on Balinese culture and philosophy over the four years of its development. The universal microcosm and macrocosm of human existence and humankind's orientation within the universe is showcased with the different sounds. The gamelan instrumentation is more pronounced and varied than the previously-reviewed album, also from Vital Records. The ensemble consists of twenty-five musicians. "Kerang Kering" is a vocal track with rhythmic chanting, speaking, and nature sounds without instrumental accompaniment. The five other tracks contain traditional tunes that are perfect for the Balinese student or aficionado of Indonesian gamelan music. This is a fine example of gamelan music produced in Bali with an American participating in the music-making process (Wayne Vitale). ~ Matthew Forss

Posted by Matthew Forss at 5:30 PM