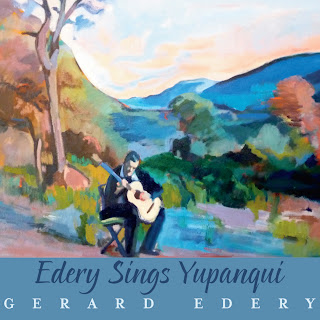 Gerard Edery's influential work on the Sefarad Record label is unsurpassed in the sephardic music genre. However, on this release, Gerard celebrates the life and music of Argentina's writer, singer, guitarist, and composer, Atahualpa Yupanqui. A worldwide performer, Yupanqui was considered the most influential Argentine folk musician in the 20th century. Gerard knows how to tap into this musical legacy with commanding vocals, light percussion, and airy guitar stylings that are intimate, meditative, and alluring. The folksy rhythms are equally dosed in rays of Latin sunshine without the addition of Argentina's most popular instrument--the accordion. The rumba, flamenco-type melodies ensnare the listener to come closer and relax to the sounds of Argentina's greatest musician. The thirteen tracks are folk melodies that come from the soul and strike the heart with utter tenderness and solace. Gerard should be applauded for this effort, especially since 2012 marks the 20th anniversary of Yupanqui's death. ~ Matthew Forss
Posted by Matthew Forss at 2:56 PM