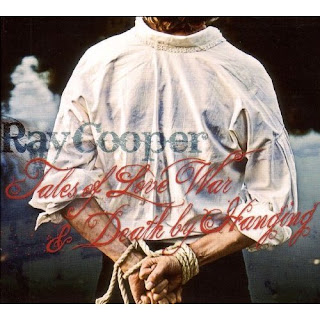 Ray Cooper is best known by his nickname Chopper with English Celtic/folk group Oysterband. Tales of Love War and Death by Hanging is his solo release which is sure to appeal to both fans of Oysterband specifically and English folk music in general. Mostly original writing, the songs on the album exemplify the term "troubadour." Just like the title states, these are stories about love and, well, war and death. Set to an acoustic backdrop of strong acoustic guitars, light percussion, strings, and headed off by Cooper's rich, deep vocals, the lyrics come through very clearly. A cover of the classic country song "The Highwayman" is injected with Cooper's personality and ability to interpret the different characters within (the original version, as many know, featured four different vocalists). Also heavily influenced by Celtic music, the songs will weave their way into your subconscious and bring you back for more. Even if you have never heard of Ray Cooper or Oysterband before, if you like folk music with a traditional feel, you really need to give this a listen. Tales of Love War and Death by Hanging is available on CD Baby and iTunes. ~Paula E. Kirman
Posted by Paula E. Kirman at 8:48 AM