CD Review: All Good Funk Alliance's 'Jack Of All Trades' 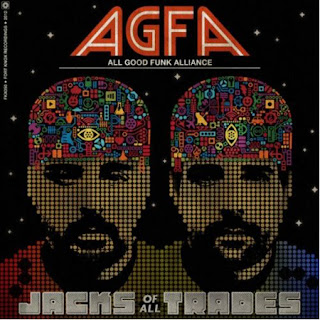 All Good Funk Alliance (otherwise known as AGFA) is an electro-funk ensemble with urban, groovy, techno, spacey, and stylistic in its approach to music-making. The electrified vocals resemble the same modifications by the group Air. A variety of musicians lend their talents to the mix founded by Frank Cueto and Rusty Belicek. You will hear Rubber Johnson, Neighbour, Think Tank, Mustafa Akbar, Empresarios, and Piper Davis. The disco-influences, funk-blended, giddy mix of electronica provides a good dance beat and electro-pop jam to get any parted started with ease. Jack Of All Trades aptly represents the varied musical genres inherent in the mix. For example, hip hop, rap, and nu-disco tunes heat up the album with loads of swag and style. The thirteen tracks are not for the faint of heart, as the beats are sure to get anyone moving. ~ Matthew Forss
Posted by Matthew Forss at 11:10 AM