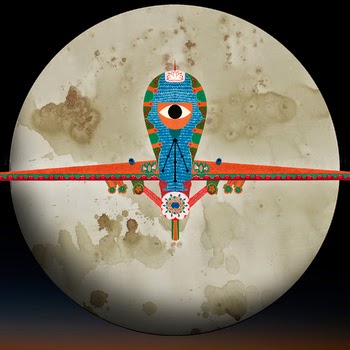 Filastine is founded by Grey Filastine. The group features Grey's electronic, multimedia, and inventive sounds, instruments, and beats. The four-track release contains the vocals of indie, Javanese rapper, Nova, who contributes some vocals on "Requiem 432" and "Murka." The electronic adornments are light, atmospheric, and futuristic. The low bass sounds, danceable taps, dub-centric concoctions, and scattered vocals make for an interesting, innovative, and ideal recording for fans with a hankering for the electronic. The music is otherworldly at times, but it is nothing that is too crazy. With titles such as "Sixty Cycle Drum," "Murka," "Drone Silences," "and "Requiem 432," the music takes on a contemporary and dance-infused characterization. The adventurous Filastine brings Aphasia to new heights and audiences with gritty, percussive nods, swishy sounds, and futuristic embellishments that are unforgettable. Try it today! ~ Matthew Forss
Posted by Matthew Forss at 11:24 AM