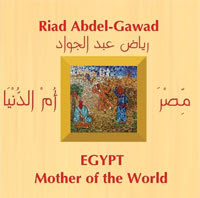 Riad Abdel-Gawad
Egypt: Mother Of The World
City Hall Records
A soul-stirring blend of classical, instrumental, Arabic tunes are Riad Abdel-Gawad's trademark. The follow-up to Riad's first release, El Tarab El Aseel (Incognito, 2008), continues the Arabic folk music traditions with a repertoire of violin, riqq, tambourine, daf, bongos, qanun, nay flute, oud, and contrabass. The entire album is void of vocalizations. Instead, the instruments provide a leading role. The tunes are completely original, but resemble Middle Eastern and Central Asian ensemble music. This could be due in part to Egypt being the 'mother of the world' as the birthplace of culturally confluent musical idioms. Whatever the reason, the lively compositions dance around in the listener's head long after the CD ends. The running time is over seventy-minutes. The liner notes fold out into a colored picture of Riad playing a violin in front of some pyramids, while the opposite side contains English and Arabic song summaries superimposed over instrument images. A classical release of creative proportions! ~ Matthew Forss
Posted by Matthew Forss at 12:03 PM