CD Review: Estonia's Maarja Nuut's 'Une Meeles' (In The Hold Of A Dream) 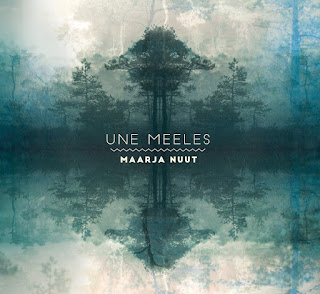 Estonia's fiddler and singer, Maarja Nuut, releases her latest musical venture full of minimalist delicacies, mysterious electronic soundscapes, and light melodies with an experimental vibe. The vocals are akin to Vaartina in parts. However, the musical structures are similar to other artists from Scandinavia. The atmospheric sounds and somewhat industrial or metallic sounds on a few tracks showcases Maarja's creativity. For instance, the sound of a cell tower is the focus of "Kiik Tahab Kindaid." Maarja's classical Indian music studies shine through on some of the fiddle compositions, such as "Siidisulis Linnukene." Interestingly, some of the plucked string compositions reflect a North African sound not normally observed in Estonian music. Fans of Scandinavian folk and experimental music should find it very satisfying. Also, the vocal arrangements are not too far from Icelandic or Greenlandic influences. This is a very engaging and solid release. ~ Matthew Forss
Posted by Matthew Forss at 10:27 AM