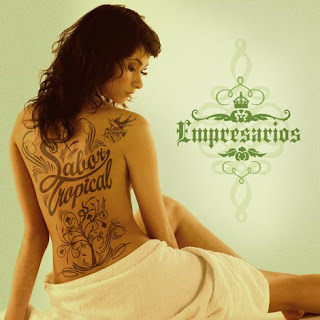 Empresarios
Sabor Tropical
Fort Knox
The Washington, D.C.-based band of modern Latin-funk is hitting the streets with the most impressive dance beats, trip hop rhythms, and dub-step on the market today. The Latin grooves border on jazz styles that heat up any occasion or mood. "Siesta" is an instrumental track right out of a Tejano film thriller. The album's title track, "Sabor Tropical", or 'Taste Tropical', contains a rhythmic groove out of the barrios or any club in Havana, Cuba. The Spanish vocals do not detract from the instrumentation and percussive tones. If there was such a thing as a Latino-Arab sound, then "Negrita Linda" would be a prime example. The deep bass beat, keyboards, and string sounds resemble an urban rhythm indicative of a club somewhere in Cairo. The classic throwback to Brazilian psychedelica and trip hop is the mainstay on "Grouper Soup". Dubtronica is another genre explored on "Happy Track". All in all, a good mix of vocals, modern sounds, and eclectic sounds paved by earlier artists, notably Nortec Collective, make Sabor Tropical an unforgettable release to start the new year and cause a January thaw wherever it is played. ~ Matthew Forss
Posted by Matthew Forss at 10:14 AM