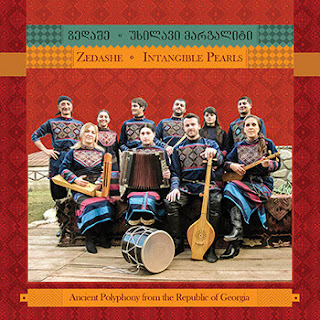 The polyphonic singing traditions of the Caucasus, especially from Georgia, stem from centuries of religious devotional chants and folklore. The amazing vocal chants are steeped in rich traditions and local cultures. The vocals are accompanied by chonguri, panduri, doli drum, garmoni, and chiboni. As a mostly vocal album, Intangible Pearls touches on the beauty of the human voice amidst different melodies, harmonies, and textures. Founded in the 1990's, Zedashe largely was created to transmit vocal songs originally lost during the Communist era. The group's name comes from special earthenware jugs made for wine. The entire album consists of twenty-five different songs spanning many generations, centuries, and social origins. Anyone interested in vocal polyphony and Caucasus music will want Zedashe to be a part of any collection. Discover it today! ~ Matthew Forss

Posted by Matthew Forss at 4:52 PM