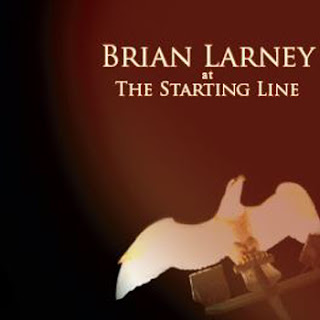 Connecticut-based singer, guitarist, and composer, Brian Larney, takes the spotlight on At The Starting Line. The folk music-based material contains a bit of Southern rock, contemporary pop, and nostalgic Americana. The eleven song release contains catchy melodies and rhythmic textures that are pure pop gold. The pop/rock anthem, "Closed Door," is a perfect song with a little Southern rock influences and lush harmonies. "Solace" is a little classic ditty with jangly guitars and an uppity tune that is highly-reminiscent of the late-Owsley. "Never Argue With The Devil" opens with jingly guitar lines and soft vocals in the vein of Fountains Of Wayne and the late-Owsley. "You Me And Allison" is an upbeat, jingly, pop-focused tune with swishy percussion and full guitar sounds. The classic folk tunes are more rock-inspired than folk, but there is an element of nostalgia inherent in similar songs from America's folk explosion in 1960's and 70's. Still, Brian puts a more modern spin on the music with a little Southern rock and contemporary folk. Each song gives us something to remember and that is definitely a positive quality. ~ Matthew Forss

Posted by Matthew Forss at 1:46 PM

Thanks so much for reviewing my new record "At The Starting Line". I appreciate the kind words and I'm quite flattered by the Owsley comparison!