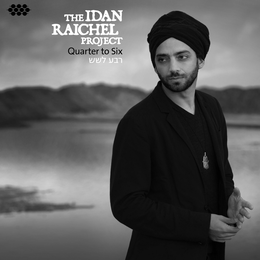 The Idan Raichel Project is back at it again with another impressive recording. Quarter To Six represents a compilation of sixteen songs mostly in Hebrew. However, Idan Raichel is joined by the famed Ana Moura and Vieux Farka Toure on two songs. The same piano melodies, symphonic orchestrations, and world fusion arrangements are still prevalent here. There is a mix of Egyptian, West African, Middle Eastern, and world pop elements that make Idan Raichel so enthralling. One of the album highlights include "Achshav Karov." The upbeat melody and soaring rhythms are reminiscent of "Mi'Ma'Amakim" from the last album. Though, "Ba'Layla" is close behind. Still, all of the songs possess the same musical fervor and catchiness that made his previous albums so popular. Some of the songs are a little more exploratory and not as structured as most of the songs on the previous albums, but they are still worth a listen. Fans of adventurous and catchy world music will find comfort here. ~ Matthew Forss