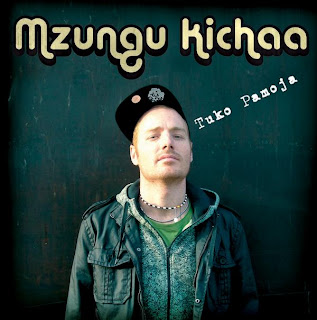 Mzungu Kichaa
Tuko Pamoja
Caravan Records
Mzungu Kichaa, which means "crazy white guy" in Swahili, is a musician from Denmark that grew up in Tanzania. Mzungu sings in Swahili and plays the guitar. Though, Tuko Pamoja, which means "we are one" in Swahili, is a contemporary hip-hop, rap, and pop work. The music is reminiscent of the modern French hip-hop scene. Traditional instruments are replaced for a more urban sound that is primarily carried by the vocals. Yet, some of the tracks are very melodic with groovy, acoustic instrumental segments indicative of Central African soukous, highlife music, or reggae. Of course, there are hints of musical influences spanning across the entire continent of Africa, but Mzungu's lyrical content mainly deals with the people of Tanzania. World rap music is relatively unknown to many audiences, but Tuko Pamoja should provide a welcome introduction to the genre for beginners and seasoned listeners. Liner notes include song lyrics in Swahili and introductions in English. ~ Matthew Forss
Posted by Matthew Forss at 3:37 PM