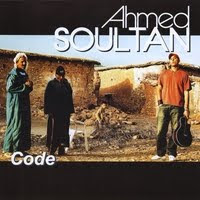 Ahmed Soultan
Code
Somum Records
Born in Morocco, Ahmed Soultan soon emigrated to France where he experimented with Arabic and French rap/hip-hop styles. In fact, some of the songs are sung in Berber, French, Arabic, and English. The overall feel of the album is very laid-back and smooth. Code is not a gangster rap album loaded with profanities and violence. Instead, it bridges a Francophone style with Arabic soul. Ahmed is joined by a female singer, Samira, on a few tracks. Three of the fourteen tracks are repeated for whatever reason. One of the three tracks features a guest artist, Afrodiziac. The secret to understanding and enjoying Code is not that difficult soon after you start playing the tracks. The music takes on a 'soul'try and smooth edge with little help from traditional instrumentation over modern hip-hop beats. One thing is for sure, Code is in its own category. It's that good. ~ Matthew Forss
Posted by Matthew Forss at 11:25 AM