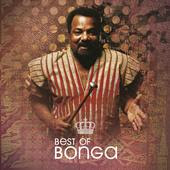 Bonga
Best Of Bonga
Lusafrica
Angola's Bonga has been an iconic fixture in the music of Africa since the 1970's. The result is a timely release of hits spanning some thirty years. There are songs from a selection of prior albums, including his debut release, Angola 72, along with Angola 74, Mulemba Xangola, Kaxexe, Maiorai, and previously unreleased tracks. The influence of Portuguese culture in Angola has shaped the way music is created. Though, Bonga's musical expressionism is steeped in the sounds beyond Angola, including Cape Verde, Portugal, and France. It is difficult to include all the great songs of Bonga on one album, so listeners will find the Best Of... to be an excellent place for new fans to become familiar with Bonga's music. The sultry voice of Cape Verde's Lura adds a special sound to the first track, "Mulemba Xangola". A special remix track, "Kapakiao", is included and takes on an eery trip-hop edge that is sure to elicit enjoyment for all who listen. Anyone interested in Bonga's previous works, as well as the contemporary music of Angola, Portugal, Cape Verde, or France, will find Bonga to be particularly refreshing and satisfying. ~ Matthew Forss
Posted by Matthew Forss at 10:58 AM