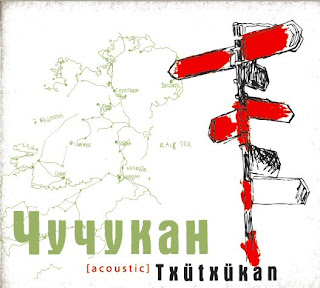 Txutxukan
Txutxukan
Wild Boar Music
Hailing from France, Txutxukan (pron: tchoo-tchoo-ken) is a Balkan/Gypsy group named after the Basque phrase for "puttering about" or "doing odd jobs". Fortunately, there is nothing overtly odd about this quintet. Though, the song titles are inventive (albeit, direct) and humorous (i.e. "Riff", "23", "Septic Swing", "Humpty Dumpty", etc.). The self-titled release is an excellent cross-section of musical creativity culturally steeped and brewed in the folk and gypsy traditions of Europe. Txutxukan's line-up includes bouzouki, clarinet, kaval, guitar, banjo, double bass, accordion and occasional vocals. Another likely musical influence is comparable to the Middle Eastern region. Though, the French-cafe element is evident on "Mets de L'air" and "Sinai". If you are looking for a fusion-based Balkan/Gypsy group, then look no further. The boys of Txutxukan are here to stay! ~ Matthew Forss
Posted by Matthew Forss at 2:27 PM