CD Review: The Spy From Cairo 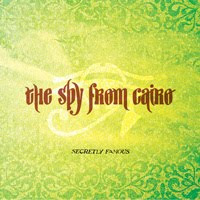 The Spy From Cairo
Secretly Famous
Wonderwheel Recordings
Originally from Italy, The Spy From Cairo is trans-global groovemaster extraordinaire Moreno Visini. There are little musical references to Italy on this album, but the dub-grooves and traditional instrumentation reflect a purely North African/Middle Eastern origin. The Spy From Cairo plays several instruments including bass, oud, saz, darbouka, keyboards, and ciftelli (two-stringed lute). A stand-out guest vocalist adds her Tunisian presence on "Ana Arabi", "Jennaty", and "Blood and Honey". Additionally, the mizmar and nay flute adds a good amount of musical fluidity on "Nayphony". Secretly Famous is a dub-fest for a new generation. There is a nice mix of original songs and remixes/tributes to great musicians from Egypt including Farid Al Atrache and Mohamed Abdel Wahab. The end result is an Afro-dub sound with an abundance of creativity, musicianship, and cultural awareness. Secretly Famous won't be secret much longer; once the addictive sounds make their way online, on the radio, and in the clubs. ~ Matthew Forss
Posted by Matthew Forss at 10:29 AM