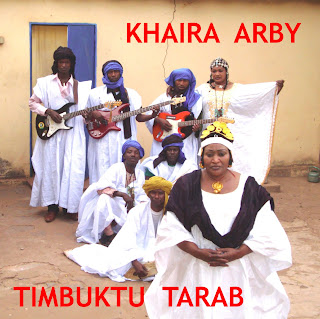 Khaira Arby
Timbuktu Tarab
Clermont Music
It seems nowadays any musician with any connections to the late-Malian blues guitar legend, Ali Farka Toure, rises to stardom. For Khaira Arby, the cousin of the late-Ali Farka Toure, the sounds of the Malian desert come alive with songs of history, social causes, and cultural influences. Khaira is a vocalist with a more traditional, but pop-edged repertoire similar to Dimi Mint Abba, Rokia Traore, or an all-female Tinariwen. There are electric guitars, njarka, drums, hand-claps, and a possible ardin and tidinit. Khaira's classic vocals represent the voice of women in North Africa. Khaira sings in Songhai, Tamasheq, Bambara, and Arabic languages. The mix of traditional North African guitar sounds and ethnic percussion and strings seems to be the right tone for Timbuktu Tarab. It is not as polished as anything by Mauritania's Malouma, or as traditional as Tartit. However, the goal for Timbuktu Tarab is to proclaim the music of Khaira by using a voice to instill social change locally and globally. Timbuktu Tarab is an album to be enjoyed by those with cravings for North African music. ~ Matthew Forss
Posted by Matthew Forss at 11:16 AM