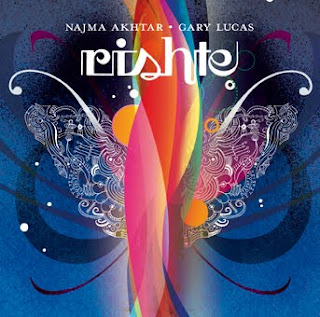 Najma Akhtar and Gary Lucas
Rishte
World Village
U.K.-born vocalist, Najma Akhtar, joins with guitarist Gary Lucas for a stunning album. The musical relationship between Najma and Gary lay in the guitar. Najma's vocals are mostly in Urdu, except for English on a bluesy cover song from Skip James in the 1930's and track ten. Gary's guitar playing does for Najma what Ry Cooder did for the late-Ali Farka Toure. Rishte is a mix of traditional Indian music and classical folk styles. However, the guitar playing is more folksy and bluesy than rock-oriented. At any rate, it is an interesting musical relationship rarely encountered in world music today. Perhaps fans of other guitarists on world music recordings, including Ry Cooder, Bob Brozman, and Ben Bowen King will find Rishte to their liking. Also, world fusion fans will delight in the music. The liner notes include English and French translations of song summaries. ~ Matthew Forss
Posted by Matthew Forss at 2:25 PM