Melanie - Laying It All Down 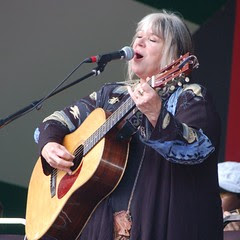 Melanie at the Edmonton Folk Music Festival
Originally uploaded by raise my voice
I had a religious experience on Saturday afternoon. "Lay Down (Candles in the Rain)" is one of my favourite songs, so when I found out that Melanie was coming to the Edmonton Folk Music Festival, I was very excited. Melanie Safka was pretty much an unknown when she performed at Woodstock 41 years ago, where that song was inspired - a song which has become an anthem of peace. She continues to tour, often including her three children (two singing daughters and a guitar-playing son) in her band. Melanie is someone who I aspire to be like decades from now - still singing songs of peace and spreading love.

In the second workshop that Melanie took part in on Saturday, Naomi Shelton led the audience in an energetic rendition of "Oh Happy Day." Melanie was up next and was reminded how she got the Edwin Hawkins Singers to sing with her on "Candles in the Rain." She launched into the song, to cheers and tears of the crowd. She combined the song with a short version of "Give Peace a Chance" and a rap on a similar theme. It was epic.

I love this woman.. thanks for posting this! It led me to a clickfest of youtube videos :)