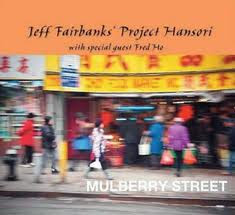 The multicultural roots of Jeff Fairbanks' jazz project incorporates the elements of Korean, Chinese, and American Big Band styles. Moreover, Jeff was trained in classical music with experience in African-American gospel and Latin salsa genres, too. Though, the latter genres are not represented on this album. The striking four-part "Mulberry Street" medley of New York's Chinatown region contains sub-titles of "Entrance and Funeral March," "Scaring Away Evil Spirits with Joyful Sounds," "Releasing Grief," and "The Send-off." Named for a street in Chinatown, the songs reflect the Buddhist and Western funerary musical styles all on a palette of big band and Asian tones. Each song is instrumental and reflects the mid-twentieth century Spaghetti Western and other American film soundtracks of the period. Interestingly, the album is rather cohesive and fluid in its musical approach and execution. There are ecstatic moments, as well as quieter jams with short interjections of trumpet, sax, or trombone. Notably, 'hansori' means 'one sound' in Korean. In closing, Mulberry Street can be summed up in one word: magnificent! ~ Matthew Forss
Posted by Matthew Forss at 4:29 AM