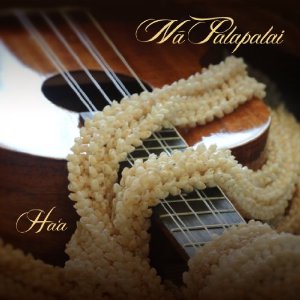 Formed in 1995 in Hilo, Hawaii, Na Palapalai makes beautiful, sweepingly melodious, and folk-tinged music with all the glitz and glammer Hawaiian music is known for. This is not your average tourist-minded music, because there is authenticity and depth in the musical instruments and harmonic vocals. Ha'a is named for hula and to be humbled. The yodel-esque, vocal calisthenics of "Ka 'Ohaohala" are energetic, along with the steel guitars. There is a classic resonance to the music overall. Besides vocals, the steel guitar, bass, ipu, and piano are featured on the album. Twelve tracks round out the album with a rousing set of danceable tunes that are pure Hawaiian folk. The spritely melodies and sparkling steel strings resemble the lazy days of a summer afternoon, but Na Palapalai are not lazy with the musicianship here. Liner notes include Hawaiian and English translations. ~ Matthew Forss
Posted by Matthew Forss at 1:53 PM