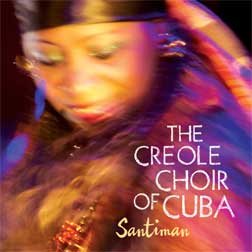 The Creole Choir of Cuba is comprised of six women and four men that are accompaned by Cuban claves, congas, piano, trumpet, and flute. The mostly vocal group celebrates Caribbean history and culture from Haiti in particular. Songs are sung in Spanish and Haitian Creole, which add to the musical beauty of the album. Formed in Cuba with members of Haitian descent, The Creole Choir of Cuba is a world music gem with globetrotting experience. The fifteen tracks represent a vivid display of vocal prowess throughout. Santiman and The Creole Choir of Cuba is the Caribbean equivalent of Ladysmith Black Mambazo. The music is vocal, energetic, and refreshing. There are Afro-Caribbean elements, operatic moments, and lively instrumentation throughout. Santiman is worthwhile for fans of Caribbean vocal music and traditional tunes from Haiti or Cuba. ~ Matthew Forss
Posted by Matthew Forss at 9:12 PM