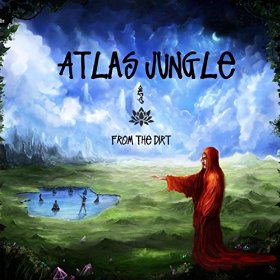 Atlas Jungle
From The Dirt
Self-Release

The Guilford, Connecticut tribal, funk, new age, psychedelic rock group, Atlas Jungle, releases an innovative five-track EP that includes both vocal and instrumental gems. The spacey, funky, and psych-laden, "Space Being," contains some atmospheric washes, electronic pulses, and smooth grooves for one heck of a ride. "The Cave" contains heady rock beats, light vocals, and gritty guitar work matched with electronic pulsations for a space-meets-South journey. "Goa Nights" opens with a little slap bass that heads right into a groovy, sultry, and funk-laden concoction with glittery electronica adornments and excellent percussion arrangements. There are even sitar-like sounds near the end of the song, which makes sense, since Goa is actually a state in Western India. The end of the song contains airy, yet punchy, flute renderings that could have been produced by a didgeridoo. "Pythagoras" is another great psych and funk journey with a slight Southern rock vein. The jaunty mix is has a world flair with sounds similar to an Australian origin. Some parts of the song are a more amped-up type of background music similar in style to a YouTube video demonstrating the Australian-made OzTent. "Snow Cat" is a vocal tune with buzz-laden sounds, heady rhythms, and a meandering beat that brings in rock, psych, and funk in equal proportions. If you haven't been convinced yet; you will. From The Dirt is definitely a highly organic experience. 5 Stars (out of 5). ~ Matthew Forss

Posted by Matthew Forss at 8:55 AM