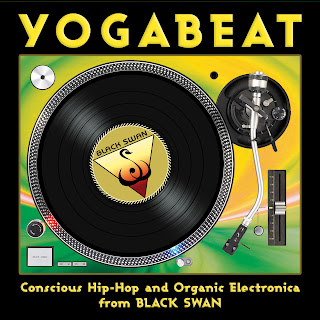 The folks at Black Swan Records have produced one of the most prestigious recordings of yoga beats aptly-titled, Yogabeat, which traverses the inner souls of the world's people with catchy beats, chakra-rockin' grooves, and dub-tastic melodies. The thirteen-track release features the Sanskrit-inspired, globe-trekking of DJ Drez, Srikala, MC Yogi, Dum Dum Project, Desert Dwellers, Adham Shaikh, Bole 2 Harlem, Sharon Gannon, Avasa/Matty Love, David Newman, Lazy Hammock, and EarthRise SoundSystem. The urban beats are contemporary, but not too steeped in urbanism. Importantly, the soulful yoga sounds reflect a South Asian influence with Hindi appeal and a world fusion appearance that emanates from the hip-hop-type music. Some of the musicians are on other albums, but this recording is mostly original. Over one hour of music will satisfy many listeners with a yoga ear, but it is important to note this is upbeat, danceable, and dreamy music with a purpose--a purpose to inspire, delight, and love it wholeheartedly. ~ Matthew Forss

Posted by Matthew Forss at 3:02 PM