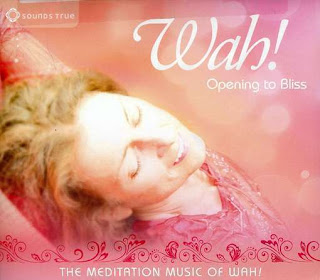 The music of Wah! is rich with bliss and steeped in meditative qualities inherent in yoga practices and kirtan performances. However, Wah! tones it down a bit and reflects on mostly previously-released material from Saravasana, Saravasana 2, and Saravasana 3 albums. The music is highly-meditative and soaring with glistening whistles, assorted percussion, string drones, and electronic keyboards. Anyone familiar with Wah! will notice her vocal inflections right away. Her previous release, Maa (2010), was a more upbeat yoga pop collection, which is not what Opening To Bliss tries to be. This is meditative music with some throat-singing and an eclectic mix of peaceful instrumentation that is sure to astound everyone who listens to it. There are eleven total tracks that run nearly one hour and ten minutes long. Most of the music is in Sanskrit. Don't miss the bliss with Wah! ~ Matthew Forss
Posted by Matthew Forss at 11:12 AM