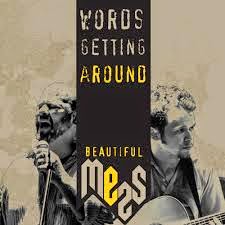 Beautiful Mess
Words Getting Around
Self-Release


The Northeast-based group, Beautiful Mess, is spearheaded by Chris Ehrhart and his nephew, Tim Ehrhart who have a passion for writing, playing, arranging, and sharing songs of a heavenly side—on their latest release, Words Getting Around.  The five-track release showcases jingly pop and rock songs with a positive message about the realities of life.  The music is more than a voice, guitar, and drums, as other instruments come into play throughout.

“Alright” opens with plaintive vocals and a briskly-played, acoustic guitar with a kind of flamenco style.  The vocals are backed by light percussion through mid-song.  The vocals feel very organic and unaltered by heavy mixing or sampling.  The last half of the song incorporates a few spoken word vocals with symphonic, rock arrangements and louder vocals by the end of the song.  However, the vocals are still discernible.  The rock arrangements are a fitting end to the song that actually ends with a few acoustic guitar chords, as delicately as it started.

“Crazy” begins with clap-like percussion, a few piano notes, and swishy percussion with great vocals.  The up-tempo beat sparkles with guitar, piano, and arrangements.  After the first few verses, a punchy rock beat occurs before a vocal only line that signals the last few lines of the song with full-on percussion, guitars, piano, and vocals in a pop-rock structure.  The pop vocals at the end of the song appropriately round out the song’s best features.

“Holding On” opens with an acoustic guitar in a folksy, raw manner.  The vocals begin, as a rich, percussive sound accompanies the vocals and guitar.  After the first few lines, a symphonic chorus incorporates a little pop-rock splendor.  There are lush back-up vocals throughout amidst the jangly percussion.  The end of the song ends as charming as it begins with plaintive guitar and vocals.

“Home Forever” begins with piano notes and a heartfelt vocal line.  A percussion arrangement kicks in with an ambulating beat and delicate taps.  A swishy cymbal clang signals more dramatic vocal performances with back-up vocals during the first chorus.  The next few verses escalate with pop-rock charisma in a more majestic tone with lush guitars, symphonic washes, and rock guitar beats.  The triumphant vocals are fueled by powerful lyrics of Christian rebirth and eternal living.  After the climax of the last chorus, the song fades out with organ sounds and percussion arrangements.

“Words Getting Around” opens with a jingly acoustic guitar tune and organ sounds with swishy cymbals and drums.  The bluesy and folksy tune is jingly and full of pop-rock splendor with vocals akin to Dave Matthews.  Even the bluesy melody and guitar arrangements are akin to something by Dave Matthews.  At any rate, mid-song features back-up vocals in a bluesy or gospel context.  The vocals are manipulated in parts by back-up vocals and some programming effects.  The back-up vocals, instruments, and arrangements come together in the end for a party-like sound of indiscriminate vocals.  The mish-mash of music is a fitting end to the song.

Beautiful Mess is a group that is inspired by things beyond this Earth and they harness that energy and turn it into great music arranged in innovative ways by incorporating a mix of instrumentation.  The music is also catchy.  Though, only five songs are included on the album. Still, the five songs are all very good without any faults.  A mix of jazzy, folk, rock, pop, Christian, and gospel elements make the music shine without any shortcomings.  Anyone with an interest in the abovementioned genres will find happiness (and meaning) in the songs.

Review by Matthew Forss
Rating: 5 Stars (out of 5)

Find them on bandcamp!

Posted by Matthew Forss at 8:22 AM