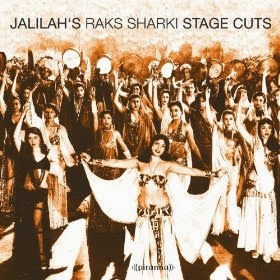 Jalilah's Raks Sharki is part of an oriental dance series in sixteen tracks or 'stagecuts', which highlight the best dance form influenced by Egypt, Lebanon, and Turkey. The instrumental tracks are orchestral, full of percussion, and loads of danceable rhythms in every tempo imaginable. The group is spearheaded by Jalilah (AKA Lorraine Zamora Chamas), Mokhtar Al-Said, Hossam Shaker, and Ihsan Al-Mounzer. There are doumbek solos and tabla showcases, which will blow you away. The incredible musicianship is heartily apparent after the first few sounds on the first track. The entire project contains tracks pulled from six previous albums. Stagecuts does not have lengthy dance tracks, which were something rather commonplace years ago. Instead, the tracks are mostly four to five minutes long. Anyone interested in bellydance, Middle Eastern and African percussion, and Hossam Ramzy will love Stagecuts. ~ Matthew Forss
Posted by Matthew Forss at 5:20 AM