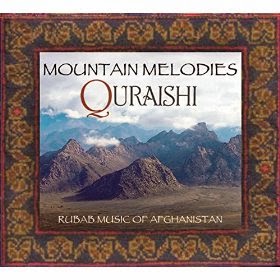 Quraishi is a New York City-based and Afghan-born rubab player with a penchant for reviving traditional Afghan music with a classical and courtly edge. The entire album is instrumental and contains a minimal mix of traditional instruments comprised of rubab, tabla, and dhol. There is a classical, Hindustani connection with Afghan music and that is evident throughout the album. There are only nine tracks, but the scintillating strings, thumping dhol and tabla, and overall melodies are worthy of repeated listens. The music does not contain electronic effects or guitars. Essentially, this is true Afghan folk music that celebrates Afghanistan's national instrument as the album's chief sound. Fans of traditional Afghan music will love its nostalgic simplicity. Furthermore, anyone with an interest in the music of Central Asia will appreciate the beautiful and serene musical qualities. Great job. ~ Matthew Forss
Posted by Matthew Forss at 5:53 AM