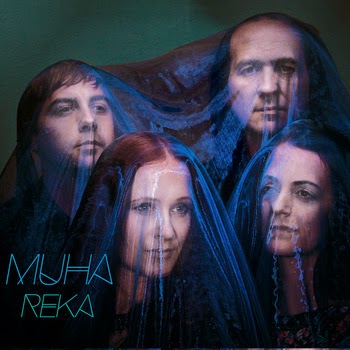 With roots in British, Indian, Latvian, and Ukrainian music, Muha is an interesting folk and roots group that transcends borders and genres. The edgy folk stylings of "Kateryna" bring an essence that is unsurpassed in folk music. "Reka" is another great tune with excellent vocals and a meandering rhythm that brings to mind Russian folk elements. The percussion is really laid-back, too. Even though the group is based in the U.K., there are elements that extend far beyond the country's borders. The bluesy "Sketches" contains a little jazz and folk. "NY Talk" is actually a flamenco-tinged tune with stellar guitar work and great vocals. There are nine total tracks that are all diverse and deeply-rooted in folk music styles of Europe. Anyone interested in folk, vocal, European, and world music will find true happiness within the tracks of Reka. ~ Matthew Forss
Posted by Matthew Forss at 10:15 AM