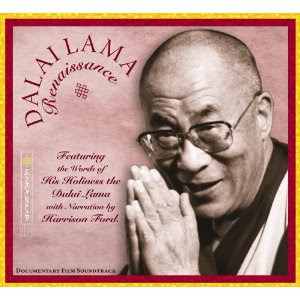 This CD is the soundtrack for the documentary film of the same title about the Dalai Lama. Like the film, this album also features narration from Harrison Ford, as well as enchanting (and chanting!) songs featured in the film. The music is very soothing and obviously perfect for personal meditation and features Techung, a Tibetan musician in exile; Heyraneh, a female Sufi singer from Tehran (a rarity); and the words of the Dalai Lama himself. ~ Paula E. Kirman
Posted by Paula E. Kirman at 8:58 AM