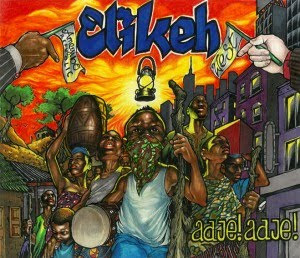 Elikeh
Adje! Adje!
Azalea City
A band of D.C.-area musicians present us with a modern form of groovy, jazzy, and dance-friendly rhythms. Headed by Togolese frontman Massama Dogo, Elikeh celebrates the musical spirit of Africa's Afro-beat giants, such as Orchestra Poly-Rhythmo and Fela Kuti. Though not a literal comparison, Elikeh taps into the same historical energy of Afro-beat bands of long ago. Yet, Elikeh is new, refreshing, and distinct. It draws upon West African, Central African, and French influences. There are ten tracks in all. Each track contains a brief song description in the liner notes. Adje! Adje! is a great release for African music fans and others looking for something accessible and easy to assimilate. ~ Matthew Forss
Posted by Matthew Forss at 2:29 PM