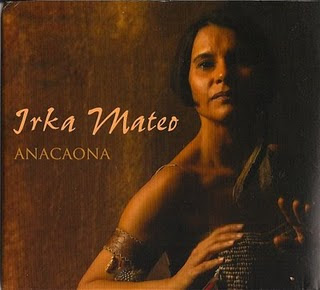 Irka Mateo
Anacaona
Independent Release
Named after a 15th century Taino chief in Haiti, Anacaono is an exploration of neo-Taino music after nearly a decade of diving into the musical culture of the Dominican Republic. A reconnection of sorts with Irka's native land of Hispaniola creates a musical project brimming with happy melodies, swaying rhythms, and sultry vocals. The musical influences of other islands and countries is evident by the percussion, guitar playing, and song structures. The Caribbean region is a region rich in musical instruments, rhythms, and cultures. In the same manner, the Caribbean is a gateway for South American and African music styles. Anacaona is largely comprised of Latin American styles with little in the way of direct, African connections. Still, Irka's vocals inspired by hundreds of years of history and culture represent a shining addition to Anacaono. Anyone with an interest in modern-indigenous music inspired by pre-Columbian times should add Irka Mateo to their collection. Spanish and English lyrics are provided in the liner notes. ~ Matthew Forss
Posted by Matthew Forss at 12:20 PM