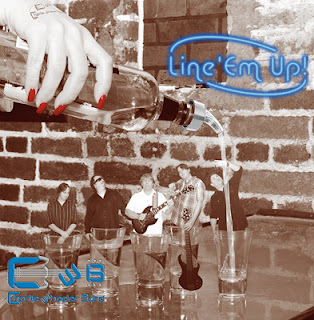 Pennsylvania-based, Charlie Wheeler Band, is not your typical rock band from the North. In fact, the music is jam rock with Southern rock elements and a tad of blues. The new album, Line 'Em Up!, is a classic ode to Southern rock sounds with original material written by guitarist and vocalist, Charlie Wheeler. Charlie is joined by Greek Cheronis on lead vocals and harmonicas; Anthony Brown on keyboards and backing vocals; Andy Baker on bass and backing vocals; and Rad Akers on drums and backing vocals. "Why O' Why" is a gritty, political tune with big guitars and big vocals that reverberate with class and charisma. "Dark Canyons" opens with a rock guitar solo and drum-kit with roots elements and Southern B3 sounds. "Gone Are The Days" showcases a little harmonica action and a bluesy, rock-guitar medley and wild vocals clearly steeped in rock with a little piano notes on a keyboard. "The Same Thing" is an upbeat, classy, Southern rock song with burly vocals and a bluesy ambiance. "Line 'Em Up!" seems like a classic, thrash-rock anthem that is steeped in Southern soul. Overall, Line 'Em Up! is a great album of Southern blues-rock for today's generation. ~ Matthew Forss

Posted by Matthew Forss at 5:21 AM