This Land is Your Land: Woody at 100 (Arlo Guthrie and Friends) 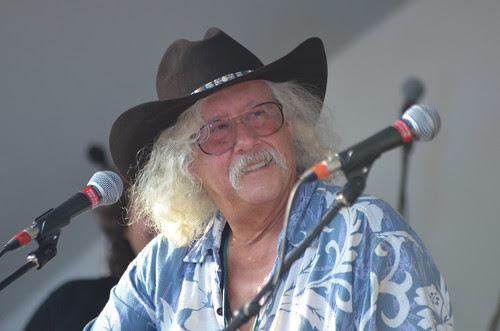 This Land is Your Land: Woody at 100 (Arlo Guthrie and Friends), a photo by raise my voice on Flickr.

For me, one of the biggest treats of the 2012 Edmonton Folk Music Festival was the chance to see Arlo Guthrie live.

"This Land if Your Land" was one of the best workshops I have ever attended at the EFMF. In honour of what would have been folk music icon Woody Guthrie's 100th birthday, his son Arlo and a host of fellow musicians and family members took to the stage to perform classic Woody songs (and a few Arlo ones too!).

Hearing Jerry Gray (The Travellers) perform the Canadian version of "This Land Is Your Land" was a real treat. Many do not know there is another version of that famous song, but my generation grew up learning it in school. Seeing Arlo join in was awesome - truly a once in a lifetime experience.

Most of Arlo's classic songs came later on in the evening during his set on the main stage with his family. However, the Guthrie legacy of father and son will forever be entwined. This workshop breathed new life into the songs of Woody Guthrie. I can't think of a better way to celebrate his 100th birthday.