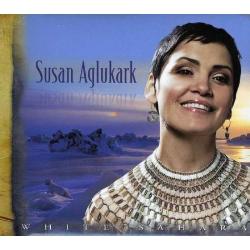 Northern Canada's native singer, Susan Aglukark, has been dazzling Northern crowds since the early 1990s. Now a national and international phenomenon, Susan has taught the world about Inuit pop-rock music with English and Inuktitut lyrics. White Sahara is a collection of mostly previously-released material, including favorites, Pond Inlet, O Siem, Casualties Of War, Big Feeling, and Hina Na Ho. In short, every song is magical, catchy, and rich with musical textures. Fans of Susan will find solace in this work, and new music lovers will find a new singer to love. If you have not heard of Canada's best aboriginal singer, Susan Aglukark, then you have been missing some of the best music the world has to offer. It's that good. Guaranteed. ~ Matthew Forss
Posted by Matthew Forss at 3:11 PM