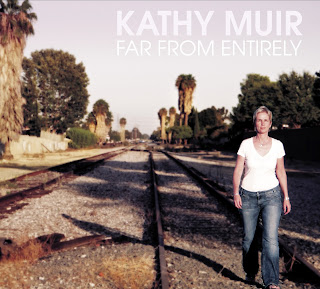 The Scottish folk-pop singer, Kathy Muir, adds a talented repertoire of country-pop guitar songs with an equal element of roots, blues, and rock. With a voice like Bonnie Raitt, Shawn Colvin, and Stevie Nicks, Kathy comes through with flying colors and equally-airborne riffs. "Fairytale Lies" is a fitting song with Stevie Nicks' signature all over it, but it is inherently Kathy Muir all the way. The steel, slide guitar opening matches the upbeat tambourine and percussion kit with a rhythmic voice and catchy melody. "You Surround Me" opens with a pensive piano melody with accompanying strings that do not include percussion until mid-song. The song is void of vocals, but it is reminiscent of a lighter incarnation of something from the Trans-Siberian Orchestra. "Heaven In Your Eyes" is a folksy song with a bluesy presence and chilling percussion, guitars, and vocals. "Sweet and Easy" is a breezy, folk song with light pop elements that are jazzy and easy to listen to. Throughout the entire album, Kathy's vocals do not contain a Scottish accent and the musical arrangements resemble North American productions. Overall, the music is varied, folksy, bluesy, and a pleasure to listen to. ~ Matthew Forss
Posted by Matthew Forss at 7:44 AM

Thank you Matthew, for reviewing my album and giving such good feedback :).